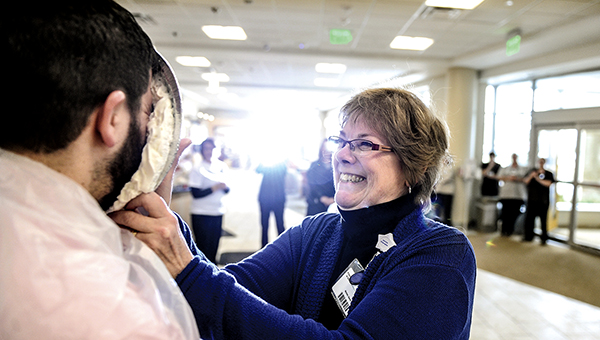 Karen Morlan steps up and gives Matt Unverzagt a face-full of pie Wednesday at Mayo Clinic Health System — Austin. The event was held as a celebration for departments making goal in a fundraising campaign for the United Way. — Eric Johnson/photodesk@austindailyherald.co

It’s not every day workers get a chance to throw pie in their boss’s face. But at noon on Wednesday, Mayo Clinic Heath System — Albert Lea and Austin employees got to do just that.

Medical center employees like Erin Evenson took the opportunity to throw a whipped-cream pie in the face of one of her administrators after her department met their goal for the United Way Employee Campaign this year.

“It was a fun thing to reward people and try to get more donations,” Evenson said.

Erin Evenson gets some coaching from Tori Miller as she eyes up who gets the first pie in the face Wednesday at the Mayo Clinic Health Systems – Austin.

Mayo Clinic Health System recently finished its United Way Employee Campaign. If a department had at least 90 percent or more of its employees participate in the campaign, they got the chance to throw a whipped-cream only pie in the face of their manager or administrator. At the end of the campaign, 17 departments met the goal, and five pies were thrown in Austin at the medical center’s front entrance. 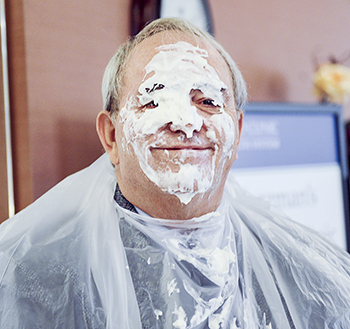 John Coppes smiles through a face-full of whipped cream.

John Coppes, the OBGYN Medical Director of both Austin and Albert Lea, excitedly awaited his fate as he stood next to the other four administrators.

“It’s supporting a good cause for United Way,” he said.

He hoped to set an example for others and show them that you’re never too important to get a pie in the face for a good cause. He was a little disappointed with the flavor, though.

“I was hoping it was banana cream,” Coppes laughed.

Tori Miller who works in the Crime Victims Resource Center explained that the medical centers in Austin and Albert Lea have always participated in the United Way campaign each year, but this was the first time they participated together, after the two organizations merged into one in 2013. She said the pie incentive came after discussing ways to make the campaign more exciting.

“We just wanted to do something a little different and kind of rally people up, and have a little fun and excitement for our campaign this year,” Miller said. “Bring a little bit of humor and fun into the workplace.”

Routh was also happy to raise money for a good cause, though she took extra measures to take cover from the whipped cream, covering both herself and her hair.

“I feel that United Way is a very important organization, and it’s the least I can do as an administrator and nurse to encourage people to participate in United Way,” she said. “And we still have to have laughter at work.”

Routh didn’t stop in Austin, though, as she was also signed up to be in the pie-lineup in Albert Lea on Thursday.

Although the goal was to raise money to give to United Way, Miller said there was another goal this year.

Miller also hoped to bring awareness to all that United Way does for the community.