Ghosts on the mind and in the basement

Halloween is on it’s way, and people have started getting their ghost on. For Adrian Lee, this is an everyday adventure.

“I do work in the media and I write books … and spend all my days in dark, lonely basements,” Lee said in his heavy British accent.

Lee, author of “Mysterious Minnesota: Digging Up the Ghostly Past at 13 Haunted Sites,” is coming to the Austin Public Library at 7 p.m. on Tuesday, Oct. 28, to talk about his book and his experiences with the paranormal in Minnesota, along with stories of the buildings he’s investigated in Minnesota and the equipment he uses. He also plans to have a question and answer session, as well. 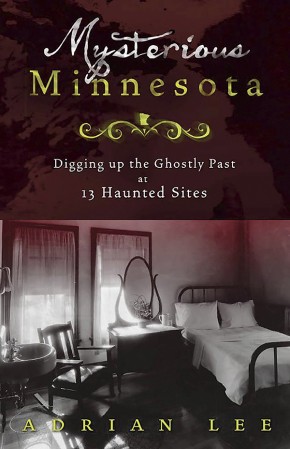 “During the month of October people start to think about ghost stories and other events,” Wyant said. “[Lee] has a book that’s checked out quite frequently here, so I thought it would be interesting.”

She was excited that Lee not only talks about paranormal investigations, but he does them himself and has a lot of knowledge about the history of different Minnesota places.

“I don’t think we’ve ever had someone come and talk about paranormal investigating whose also an author and professor of history,” Wyant said. “I hope that people will [learn] a little more just about their own history of their state.”

Lee, originally from London, moved to Minnesota for a job opportunity on a show about the paranormal. Though that show didn’t go far, he decided to stay in Minnesota.

“I didn’t know it would be so bloody cold,” he laughed.

Lee has been interested in the paranormal since he was young and considers himself a psychic. He said he has seen many ghosts since he was young, and since Minnesota is fairly young, it fit well with the age range of ghosts that he normally gets to speak with.

“I have a passion obviously for the paranormal and history,” Lee said. “There’s so much history that’s tied up here that’s been lost.”

He lectured as a history professor in Europe for 14 years and was the head of several art and history departments and a local government advisor for education. He was approached by a team of paranormal investigators who wanted a historian to help them learn about the buildings they were investigating. Lee is the founder of the International Paranormal Society and a member of the Luton Paranormal Society in England.

Now, he and a team of nine others travel across Minnesota investigating buildings and places rumored to be haunted. He talked about his experiences speaking with spirits in different areas and finding out surprising things.

“They give me information that’s previously been lost to the knowledge of man,” Lee said. “I spend a lot of my time interviewing dead people to find out what it was like to live in their time period.”

He said when he goes into a building that is rumored to be haunted with his team and equipment, he takes the time to stop and ask if there are any spirits and if anyone would like to speak with him to tell him what happened. He said he even has early recordings of people telling him how to spell their names correctly.

He recalled one spirit named Matt who spoke with him. After the encounter, Lee went to the newspaper archive and found a paper from 1904 with an article about a fireman named Matt, who had oil spilled on him in an industrial accident and died.

“The book [Mysterious Minnesota] is driven by the dead giving me information that no one else would know of,” Lee said. “I can actually interview them. It’s primary source material.”

One of the main reasons Lee said he is different than other paranormal investigators is that he does the research before and after investigations, to find out the information that could help him understand what happened to make the building haunted.

Lee said what is going on in buildings is not always what people think, or want to think, it is. He said many people call him about a “demonic entity” switching lights on and off and shutting doors and such.

“Demonic entities don’t do that, that’s just a grumpy old man who doesn’t want you living in his house,” Lee said.

A normal week for Lee is spent doing psychic readings and talking to people’s departed loved ones. He said the biggest problem he has, especially around Halloween, is that there is only one of him, and he has to manage his time carefully. Some of his upcoming events include visiting other libraries, having a book signing at Barnes and Nobel in St. Cloud, doing a ghost walk at the Christie House in Long Prairie, and other events for non-profit organizations.

Although he has never been to Austin, Lee is excited to visit a new Minnesota town. He would like to investigate places around the area for his next book and asked anyone with ideas for haunted sites to contact him, either in person at the library on Tuesday or via his website, www.intparanormal.net. The event is free and open to the public.

While he is excited to talk about his experiences, Lee hopes the audience goes home with something too.

“I want people to learn more about the history of Minnesota,” Lee said. “So if they leave that talk knowing more about the state that they lived in and were born in, that would be beneficial too.”