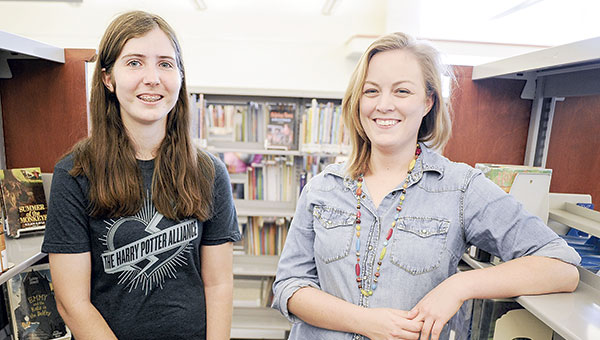 Sarah Schramek, left, and Kari Oanes are the chapter organizers of the Harry Potter Alliance. The group works to raise awareness. So far they hosted a book drive that received more than 400 books.
Eric Johnson/photodesk@austindailyherald.com

They’ve read the books, they’ve seen the movies, and now they’re taking their passion and using it for good.

Sarah Schramek and Kari Oanes have taken their love for Harry Potter and utilized it to create a group to help the community.

“It’s not a Harry Potter fan club,” said Oanes, youth services librarian at Austin Public Library. “It’s more about the excitement and fervor a fandom can create. It mirrors the values of fighting for social justice and equality [in the Harry Potter books].”

The Harry Potter Alliance is an international organization that has hundreds of chapters throughout the world. It raises money and holds different types of drives for campaigns regarding equality, human rights and literacy among others.

The Austin chapter, named Kingsley’s Marauders, has been active since February. Schramek decided to create an Austin chapter of the Harry Potter Alliance because she was familiar with the organization and wanted to create one closer than the nearest one, which is located in Winona.

“I knew a lot about [the Harry Potter Alliance], so I thought ‘Hey, why not start one here?” she said.

With just a couple emails and the tap of a button, Schramek applied to the international HPA and received the OK to start the Austin chapter of the organization.

“It’s actually very easy to start your own chapter,” she said.

However, she wanted to make sure it was a community group instead of a high school or college specific chapter so it could be open to adults as well. Though only about two additional people attended the first meeting, the group has since grown. The group now have 10 members, and hope to keep growing as the group settles in.

Currently, the organization’s main priority is its monthly meetings, where future ideas for fundraising projects are discussed.

Accio Books, a book drive in May the organization took part in, donated books to Read Indeed. Schramek and Oanes expected a low outcome, but were pleasantly surprised with the success they had.

For the next projects, the group plans to have a table at RE-fest in September and to host a bake sale. However, group leaders don’t want to plan any large fundraisers yet.

“We don’t want to do anything too big yet,” Schramek said. “We want to get our name out there first and let the community know who we are.”

Schramek was able to attend Leaky Con, a Harry Potter convention in Florida, where she was able to learn tips on what to do with chapters from the president of the international Harry Potter Alliance

“It was really great, and they care about what your [chapter] is doing,” Schramek said.

With the knowledge she gained, she hopes to get the group more involved with the community and continue and run a successful chapter.

The next meeting will be held on Sept. 15 at the Austin Public Library, and the public is welcome to attend.