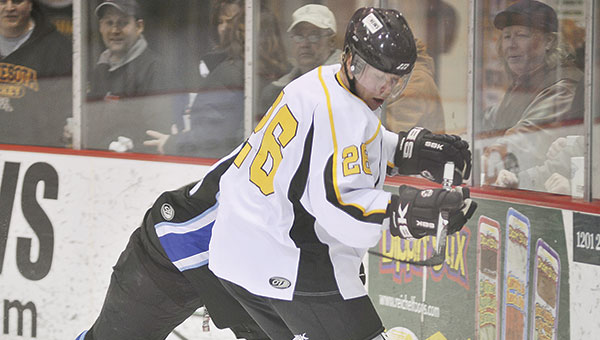 Christian Folin plays the puck behind the Austin Bruins’ goal in a game against Coolie Region in 2011. — Herald file photo

The Wild trimmed their roster by seven Monday, clearing the way for a big competition between Matt Dumba and Christian Folin on defense.

The team placed two defensemen with NHL experience — Jon Blum and Justin Falk — on waivers, along with forward Joel Rechlicz. If they clear, they’ll be assigned to the Wild’s AHL affiliate in Des Moines, Iowa.

A battle between Dumba and Folin, promising young defensemen, has been brewing for some time, and waiving Blum and Falk sets up a final battle for one roster spot on the blue line.

There’s a chance both could make the team, but only if the Wild determined each would play every night. For that to be the case, they’d both have to beat out veteran Keith Ballard.

“I’ve said it enough times: I don’t want anybody sitting in the press box that’s a young player,” coach Mike Yeo said. “They need to play games; they need to develop.”

Folin and Dumba had moments in Monday night’s 4-1 exhibition win over Pittsburgh where it was easy to see them making the team.

Dumba’s burst exiting the defensive zone is unparalleled and he skates with the puck as well as any Wild defenseman.

“I thought overall he was good,” Yeo said. “There were a couple plays that I wasn’t thrilled with, but at the same time we understand that he’s trying to make our team and he knows he’s not going to make our team by just going out and being a safe player all night long.

Folin cleared out space in front of Wild goalie Darcy Kuemper and recorded a plus-1 rating.

Both players insist they haven’t been keeping track of their competition.

“Honestly, you can’t get your head caught up in media or what’s going on around you like that,” Dumba said. “You’ve got to focus on your game and what you have to do for the team. That’s my focus.”

Folin played in his only NHL game last season April 10 at the Xcel Energy Center and said he’s been looking forward all summer to another game in St. Paul. Monday was his first at the X since his NHL debut.

“When I was sitting on the bike in the middle of July and needed a little extra push to bike out that last five minutes, that’s what I’d be thinking about,” Folin said. “(But) the only thing I can control is how I play and how I perform every day, so that’s my main focus. I’ve been talking about that since I got here.” 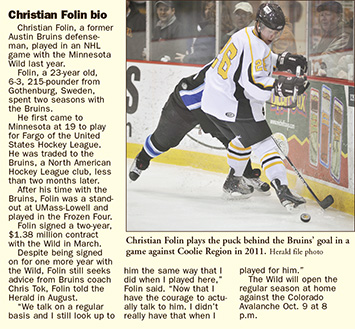 “I don’t want these guys just coming into the game analyzing and over-thinking things,” he said. “That’s part of the competition for them, to be able to deal with that.”

In their ongoing quest to get down to the maximum 23 players by opening night, the Wild will effectively trim their roster to 28 Tuesday.

Forward Jordan Schroeder, a University of Minnesota product, will be placed on waivers and sent to the AHL Iowa Wild if he clears.