Robert Earl Harber, 85, of Blooming Prairie, went to be with his Lord and Savior on Saturday evening, Aug. 16, 2014. Robert “Bob” Harber was born Oct. 14, 1928, at home in rural Mower County, Minnesota, to Thomas Earl and Viola Emelyn (Selstad) Harber. Bob attended country school and graduated from Blooming Prairie High School in 1946. On Aug. 21, 1949, he was united in marriage to Doris Mae Mellem at St. Olaf Lutheran Church in Austin, Minnesota. The couple raised six children on the family farm where Bob was born and lived his entire life. Bob took over the family dairy farm, milking cows for 71 years, as well as serving as Township Assessor for 46 years for Udolpho, Lansing, Austin and Red Rock townships. Bob and Doris traveled to Norway, Alaska, Colorado and other places in the United States visiting family. He enjoyed reading, playing cards, spending time with family and neighbors, and hunting, especially traveling up north to hunt with relatives. He was a great roller-skater, power-napper and joke-teller. Bob was a member of Red Oak Grove Lutheran Church where he had served in many offices, Sons of Norway, Gideon’s and the Blooming Prairie Gun Club. Doris died on Feb. 11, 2014. 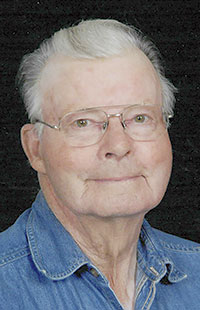 He was preceded in death by his parents, Thomas and Viola (Selstad) Harber; his wife, Doris Mae Harber; a great granddaughter; and one sister, Betty Bruggeman.

Funeral services will be held at 11 a.m. on Thursday, Aug. 21, 2014, Bob and Doris’ 65th wedding anniversary, at Red Oak Grove Lutheran Church with Rev. Lindsay Stolen officiating. Visitation will take place from 4 to 7 p.m. Wednesday, Aug. 20, at Worlein Funeral Home in Austin and for one hour prior to the service at the church on Thursday. Interment will be in Udolpho Cemetery at a later date. The family suggests that memorials be directed to Red Oak Grove Lutheran Church. Worlein Funeral Home is in charge of arrangements. Condolences may be expressed to the family online at www.worlein.com.