1,100 tires and counting: Volunteers reach milestone in cleaning the Cedar 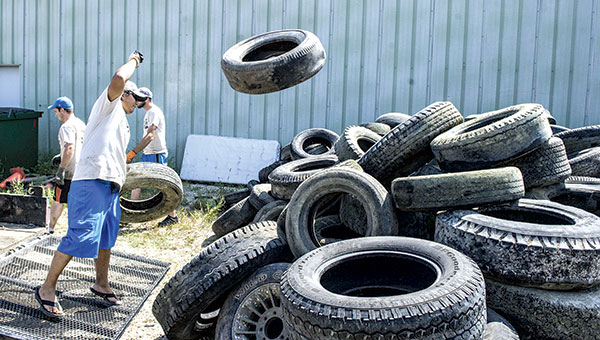 Joe McCarthy of the Conservation Corps. Of Minnesota throws a tire on a pile Thursday afternoon. The group gathered the tires from the Cedar River. Eric Johnson/photodesk@austindailyherald.com

“To have this major initiative with the Conservation Corps of Minnesota & Iowa and Adopt-A-River folks cleaning it up, we’re really excited about the state of the river right now,” CRWD resource specialist Justin Hanson said.

On Thursday afternoon, a group of about eight volunteers from the Conservation Corps helped pick tires out of the Cedar River for the seventh straight day and crossed the 1,000-tire mark. Crew leader Travis Wilder was excited about their progress.

“We’ve pulled out 431 [tires], and that number let us exceed 1,100 tires pulled out of the river by volunteers,” Wilder said. “It’s very gratifying to see all the tires piled up that we pull out each day.”

Another Conservation Corps group pulled about 220 tires from the river last fall during a two-day cleanup. The group worked in October last year, but water levels have been fairly low this August, allowing the group to find more tires.

“At this time of year the water’s low enough where we can see most of them and be able to get them out,” Wilder said.

The group covered a stretch of river about 19 miles from Austin to the state line, according to Wilder.

Although the number of tires is high, Hanson was pleased that many of the tires they found were not new.

“Almost all of these tires have been here for many years, probably 50 years plus,” Hanson said. “I think that’s a really good sign that there’s been some education and that people are better informed.”

According to the Minnesota Department of Natural Resources, large numbers of tires being found in the state’s waterways stem from a tire disposal problem in the state during the 1970s and 1980s. 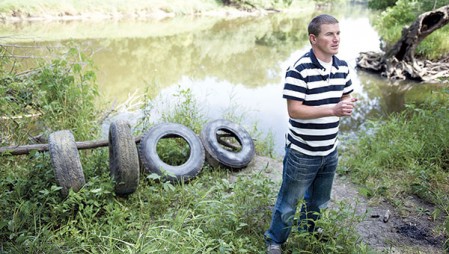 With all the cleanup initiatives, Hanson said this is the cleanest the river has been in a while. Yet it’s not just cleaning tires from the river. There have also been pollution control efforts to limit what runs into the river farther upstream.

Tim Ruzek, CRWD’s public-outreach coordinator and co-chair of the Austin Vision 2020 Waterways Committee, said the cleanup efforts have made the Cedar River the cleanest that it has been in likely many decades.

“All of us Vision 2020 Waterways volunteers greatly appreciate these cleanup efforts as they further improve our local, scenic waterway and help our work to enhance and promote the recreational opportunities on the Cedar River State Water Trail,” Ruzek said in a press release.

Hanson has hopes the CRWD will get a break from cleaning up the tires.

“We’ve been at it pretty intensely now for a few years, and the idea is that there won’t be new added tires thrown in,” Hanson said. “We’ve gotten the major part of the problem addressed.”

The Conservation Corps is one of about 11 groups that have worked to clean the river, as Hanson said the Adopt-A-River program has been successful since it’s start in 2011.

“We’ve had members that have adopted every section from the top of the county and the watershed all the way down to the border,” Hanson said. “We’ve been really excited about that.”

Hanson was thankful for all the groups that spent time to help clean the river, especially the Conservation Corps.

“We’ve had really good guys and gals that have come down here,” Hanson said. “We’ve been really lucky and fortunate to have as much time down here, dedicated to our resource.”

Although the group saw other items in the river, such as a pontoon, burning barrels, scrap iron and a pay phone, this cleanup focused specifically on tires. The group plans to return Monday to clean the same stretch of river again, but with a focus on scrap metal.

In Mower County, the Cedar River is designated as a State Water Trail under a DNR program after the CRWD successfully proposed and secured the legislative approval in 2011.

Earlier this summer, Conservation Corps members, working with CRWD, cleared several log jams on the Cedar along a stretch in the Wildwood Park area in Austin that is prone to jams. That stretch from Ramsey Dam to the Downtown Mill Pond now should be portage-free for canoeists and kayakers thanks to the crew’s work. Read more about that project here.