Quiznos to close in August 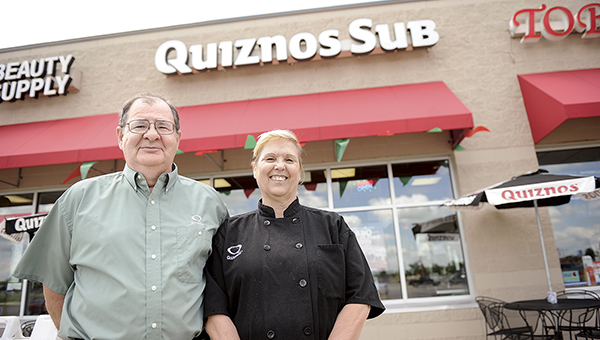 Norm and Marlene Blaser stand outside the Quinzos they own in the Target strip mall Tuesday morning. The couple may be closing the restaurant at the end of August unless they can find a buyer. The Blasers are planning on retiring. Eric Johnson/photodesk@austindailyherald.com

Unless a buyer comes forward soon, Austin’s Quiznos will close later this summer.

Quiznos owners Norm and Marlene Blaser announced plans Tuesday to close the business they’ve run for about a decade in August to retire. However, the two would like to see the restaurant, located at 1702 17th St. NW, Suite H, continue in new hands.

The Blasers have had the business for sale for several months, but they haven’t been able to work out a deal with a buyer. If a buyer comes forward, the two will stay open longer during the transition.

One reason for the closure is personal. Marlene has diabetic retinopathy, a symptom of diabetes that can eventually lead to blindness. But the restaurant business is also slow in Austin and across the country, according to Norm.

“It’s just not an up time right now for restaurants,” Norm said, who pointed to other recent closures in the Austin area like Gymocha and Tolly’s Timeout.

The restaurant industry has been down for about the last three years, according to Norm, and things like the drought in recent years, the long winter and other factors drove up produce, chicken and beef prices. 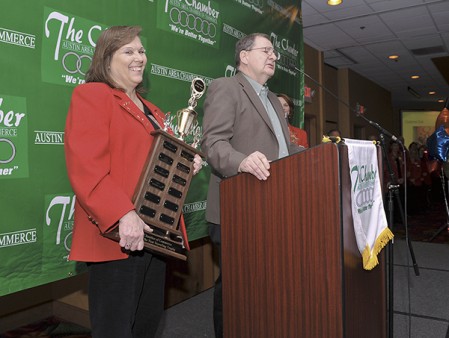 Norm and Marlene Blaser accepted the Business of Year award during the annual Austin Area Chamber Commerce banquet in 2012 at the Holiday Inn. Herald file photo

Quiznos opened in 1999 in Austin, and the Blasers have received several recognitions and awards since they took over in 2005. Quiznos was named 2011 Austin Area Chamber of Commerce Business of the Year.

In 2007, the restaurant was recognized as 10th best in the nation in customer service. Marlene said she and other employees are able to call many of their customers by name, and the Austin Quiznos was also a training restaurant for new Quiznos owners in Minnesota, Iowa, North Dakota, South Dakota and parts of Wisconsin.

The Blasers, both cancer survivors, have been involved in several cancer fundraisers like Paint the Town Pink and the Mower County Relay For Life for several years. In late 2013, the Austin Quiznos placed first among all Quiznos in the U.S. by raising $1,160 during a six-week fundraising campaign for leukemia.

Despite retiring, the couple plans to remain in town.

“We have so many friends in this town; it’s impossible to leave,” Norm said.

Norm was an administrator at Pacelli Catholic High School for nine years and worked in school administration for 41 years. He will be working with Pacelli again this year.

Norm said anyone interested in buying the restaurant can stop by the store.