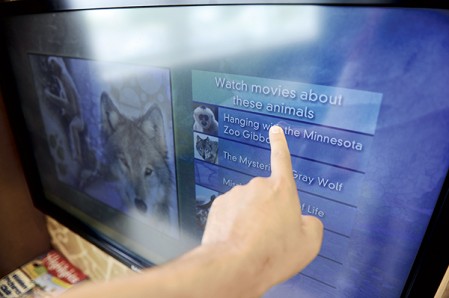 Children in the area will be able to enjoy a few animal lessons thanks to Karl Potach.

The Karl R. Potach Pediatric Clinic has wrapped up the last of its new additions for children to use at Mayo Clinic Health System in Austin. A video kiosk featuring animals from all over Minnesota was installed in the pediatric clinic in May, the last of more than $220,000 worth of amenities for the clinic. 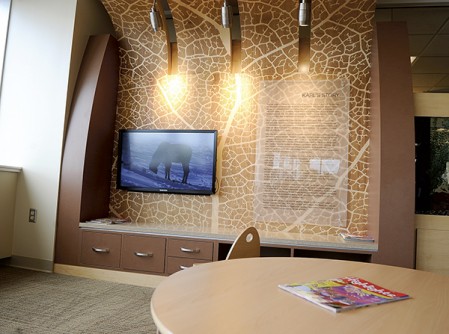 The animals kiosk in the Karl R. Potach Pediatric Clinic at the Mayo Clinic Health System in Austin. Eric Johnson/photodesk@austindailyherald.com

“It was a real honor to be asked to be a real part of it,” Brenda Potach, of the Karl R. Potach Foundation said.

Brenda and her husband, Kurt, helped Mayo officials organize the pediatric clinic in honor of Karl, her son. Karl succumbed to cancer in 1997 before his fifth birthday.

The pediatric wing was part of the $28 million, 85,600-square-foot expansion that was unveiled last year, but the clinic wasn’t completely finished until an April open house, when the hospital added amenities to its waiting room in Karl’s honor similar to the types of activities Karl enjoyed when he received treatment for Wilms, a pediatric cancer.

The kiosk shows several educational videos on animals, including a tour of the wildlife along the Mississippi River.

With the kiosk finished, the clinic has several activities for children to enjoy while waiting for treatment, including a 240-gallon fish tank.

“It’s a really nice way to be up there and entertain your kids and if they have to wait for a long time, they have something to do,” Brenda said.

Brenda is honored her family was asked to be part of the project and has enjoyed the times she has seen children playing with the new amenities at the pediatrics clinic. She’s excited for children to learn a little bit about animals from the kiosk.

“It’s better than Spongebob,” she said with a laugh.

Trey Mewes can be reached at trey.mewes@austindailyherald.com