A taste of survival; Class teaches children how people from the past lived in the outdoors 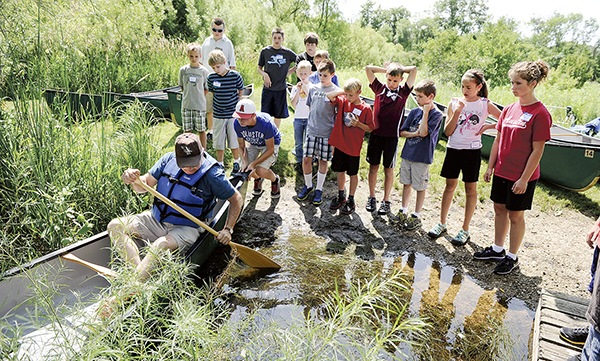 Jay C. Hormel Nature Center Director/Naturalist Larry Dolphin pushes off in a canoe to demonstrate how to properly guide one around on the pond at the nature center Wednesday. — Photos by Eric Johnson

Executive Director Larry Dolphin’s voice could be heard, describing the different berries and wild grapes to a group of children on Thursday morning at the Jay C. Hormel Nature Center.

When the children began asking if they could eat the wild grapes, nature center director Larry Dolphin responded with a smile, “They won’t be ready today.”

About 16 children participated and experienced activities like canoeing, fire-building, cooking lunch over a campfire, fishing, playing old-time games, candle-making and learning about the Native American “Ghost Dance” shirts by making their own out of paper during an art project.

They also learned to make arrowheads and throw atlatls — or spears — and listened to Minnesota storyteller and naturalist Kevin Strauss share history, folklore and tall tales. 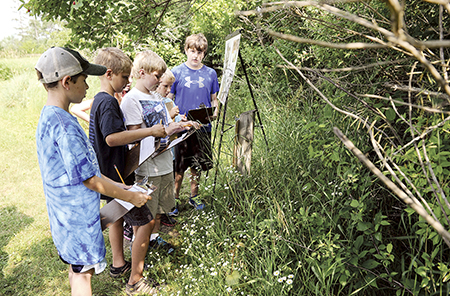 For the students, it was a fun experience learning something new. Brooklyn Voth, 11, doesn’t go camping often, so it was fun to learn skills she might not learn otherwise.

“I’m here to learn about survival and how to survive in the wild,” Brooklyn said.

She was excited to learn camping skills, but her favorite activities were canoeing and fire-building.

“Canoeing was challenging, and fire-building was even harder,” Brooklyn said. “The nature center is very fun.”

She found out about the program through a pamphlet at school.

Twelve-year-old Sarah Hecimovich also enjoyed the week-long class. She has attended nature center classes for a few years now, but she really enjoyed learning to build a fire.

“It’s a challenge, and you can learn to work with other kids,” Sarah said. 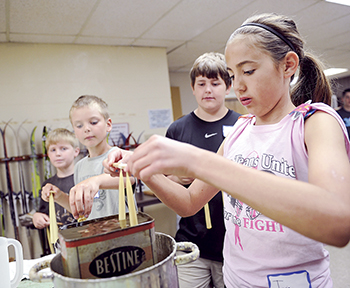 Dolphin said the class has gone on every summer since he first came up with the idea in 1989. This was the first year they ran the class for five days instead of four, adding activities like fishing that pushed them into an extra day.

The summer programs are interactive, with little talking and more physical activities. This year focused on looking at different cultures and their past way of life, including French voyagers, Norwegian immigrants, and Native Americans, specifically the Dakota and Ojibwe.

“Making connections with the past and how people lived in the past, and getting a feel for how things are different today,” Dolphin said. “I look at it as a place for kids to learn and have an interactive experience.”

The class ran from about 9 a.m. to noon every day and cost $60. Because the nature center receives around $1,500 to $2,000 every year in donations, they are able to offer scholarships, taking the price down to half the cost for students who apply. Many of the children who attend continue to come back each year, according to Dolphin. The Heritage Survival Class usually has a waiting list since there is a limit of 16 students, and has gotten very positive feedback.

Yet the children don’t enjoy every aspect.

“One complaint this year would be the mosquitos,” Dolphin said.