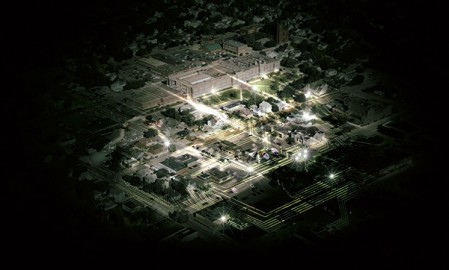 Austin’s Vision 2020 is looking to the future and the viability of bringing a high-speed fiber optics network to the city. Illustration by Eric Johnson

Jessica Swanson got a taste of high Internet speeds a few years ago.

As a Kansas City, Mo., native, she got to use Google Fiber, a fiber optics network that provides broadband Internet speeds hundreds of times faster than average Internet at a friend’s house about two years ago. She was blown away by how fast everything seemed online. It was a big reason why she decided to volunteer with Vision 2020’s Community Wide Technology committee less than two years after moving here.

“Craig Jones had mentioned something to me. He barely said five words and I exploded,” she said with a laugh.

Swanson, a human resources officer with The Hormel Institute, is craving faster Internet like many people today. Vision 2020 has a plan to meet that need, with a proposed project to install a 1 gigabit-per-second data fiber network within the Austin Public Schools district. That network would boost Austin Internet speeds many times higher than surrounding areas through direct home connections to an underground network of glass wires designed to transmit massive amounts of data.

The plan, called Gig Austin, is an ambitious attempt by the community improvement initiative to transform the Austin area over the next few years. It carries some risk and there’s still many unanswered questions.

Yet if volunteers successfully build a data fiber network, it could mean more than just a better Netflix connection. Gig Austin could bring more economic development and foster a tech-friendly atmosphere to create more opportunities in the area.

Vision 2020 released the results of a feasibility study Friday which showed Austin could support a fiber Internet service. According to the study, the high-speed broadband Internet service could be built for about $35 million and could be run by all kinds of organizations, from public utilities to a private co-op.

Under the Gig Austin plan, all of the Austin Public Schools district could access fiber Internet. Laura Helle, director of vision creation at Vision 2020, said the committee believed rural properties near the city that were still part of the district would need access as some providers don’t cover those areas.

“Generally, any area that’s served with a telephone cooperative is now served with fiber to the home,” said Bill Coleman, a telecommunications consultant out of Mahtomedi. “We’ve seen a tremendous investment by those companies in those rural networks.”

Coleman has specialized in rural telecommunications efforts like fiber networks for the past 15 years and worked with the Community Wide Technology committee last year. Aside from faster Internet, Coleman has seen more communities nab fiber networks because of its economic potential. Some places, like the Brainerd area, have become a hotspot for companies with more technology needs. In addition, several studies show fiber networks actually boost property prices.

For all its benefits, a fiber network isn’t an easy task to accomplish. Broadband Internet infrastructure costs millions of dollars to install in a community and not everyone is tech-savvy enough to see value in a large project.

“I think any time you’re talking about technology, the majority of people are really happy with what they have,” Helle said.

Communities need a number of things to go right to truly benefit from a fiber network. Many communities have taken on fiber projects only to charge higher prices for access to higher speeds, and most communities offer less than 1 Gbps Internet speeds. Only about 20 communities in the U.S. have 1 Gbps fiber networks.

That means far higher Internet prices for residents and businesses than competing Internet providers, even with better Internet speeds.

Yet communities that do have fiber networks will find ways to make it work, according to Helle.

“A lot of the projects that are held up as failures, if you call and talk to that community, they don’t necessarily see them as failures,” she said.

Still, volunteers wanted to be sure that Austin could not only build a network but pay the project off and offer Internet at comparable prices to other providers. The feasibility study, paid for through grants from the Blandin Foundation, Hormel Foundation and Ag Star Financial, bolstered the committee’s vision.

“Austin is in a pretty unique position,” Helle said “There are a lot of things that are really unusual for our size. I think it’s given us this kind of confidence and enthusiasm and willingness to push forward that a lot of other communities don’t have.”

With strong support from area nonprofits and representation on the committee from organizations like The Hormel Institute, Jaguar Communications, Austin Utilities and private technology companies, Austin is in a position to pursue a high-speed fiber network.

The Community Wide Technology committee hopes to use the feasibility study’s results to educate area residents on Gig Austin. Volunteers and experts point out fiber offers speeds far higher than the average 5 megabits per second in the U.S. Fiber is also more reliable, as the glass cables won’t corrode or be damaged by lightning. In addition, a fiber network is built to withstand even faster Internet in the future.

Even then, the average Internet speed falls far under those ranges.

“You’d have to be sitting right next to the network for it to work like that, with no one else on, at 4 in the morning,” Craig Jones, a Vision 2020 volunteer, said at a community meeting earlier this week. “There’s just no way to get that sort of speed.”

Fiber optic cable can get up to 1 Gbps per second — about 1 billion bits — and more, as the equipment used to send data can be boosted to higher speeds without changing the fiber. Because of the way fiber is connected, it can consistently get faster Internet speeds.

People like Coleman and Swanson have seen this firsthand.

“It was pretty amazing to do the speed test and get 100 megabits of connectivity over a wi-fi connection,” Coleman said.

There’s still plenty of questions for Vision 2020 to answer, however.

Gig Austin doesn’t have an owner yet, nor does it have firm costs to build the network. The study may have put a $35 million price tag to build a network in Austin, but costs could grow depending on how Gig Austin is funded. It’s too early to determine how expensive data plans will be to use Austin’s fiber, but Helle and other Vision 2020 volunteers say they want to keep data plans comparable to what residents and businesses currently pay.

Of course, the biggest question remains: Who’s paying to put in fiber?

Committee members say the project could be funded in large part by state and federal grants and don’t currently plan to seek local tax dollars to pay for Gig Austin.

Vision 2020 already submitted a grant application to the Federal Communications Commission, which announced its intentions to help fund rural broadband networks in January. The FCC set $100 million aside for broadband projects on July 11. In addition, Minnesota created the Office of Broadband Development in 2013 and budgeted $20 million to it earlier this year.

Those grants may not cover much — Austin could use all of the state’s broadband money and then some — but the committee also hopes to attract private grants and nonprofit cooperation from groups like the Hormel Foundation, as well as potential partnerships to bring Gig Austin to fruition.

Those partnerships may help decide who will own and operate the network. Austin Utilities General Manager Mark Nibaur said the company will likely partner with Vision 2020 and may contribute dollars to Gig Austin, but the utilities board may decide not to operate the fiber network.

“I don’t think there’s any interest in ownership,” he said.

Many organizations have talked about owning Gig Austin under the right conditions, according to Helle.

“Since the report shows there’s more than one way it could be run, we think that it’s just contingent upon who comes to the table and says we’re really interested in this,” she said. “Almost every meeting we’ve had, we’ve talked about it. In some ways we were hoping that the report would come back and say, ‘Don’t even consider a for-profit business.’ But it didn’t eliminate anything.”

Many organizations could come forward based on how much interest there is in the project. That’s the committee’s next answer to find.

The study recommends at least 40 to 50 percent of Austin residents will need to use fiber to successfully maintain the network and turn a profit. Committee volunteers will conduct surveys in late July and August throughout three Austin neighborhoods to gauge interest in Gig Austin. In addition, Vision 2020 has set up a website that has more information on fiber networks and the Gig Austin plan. Residents can sign up for email updates on the project at www.gigaustin.org.

Volunteers will also spread the word via social media and may plan more publicity efforts in the future.

“That’s one of our tasks, is to educate and communicate to the community the advantages of the program and the cost and how fiber works,” Nibaur, also a committee member, said.

Gig Austin is an exciting initiative for committee members like Swanson who’ve already experienced high-end Internet speeds. She never got Gigabit-per-second Internet in Kansas City, though everyone she knows there raves about Google Fiber. Swanson can see the benefits for faster Internet, especially when she struggled with her online connection while she worked at home during her first eight months in Austin.

“That would have been a huge, huge, huge difference,” she said.