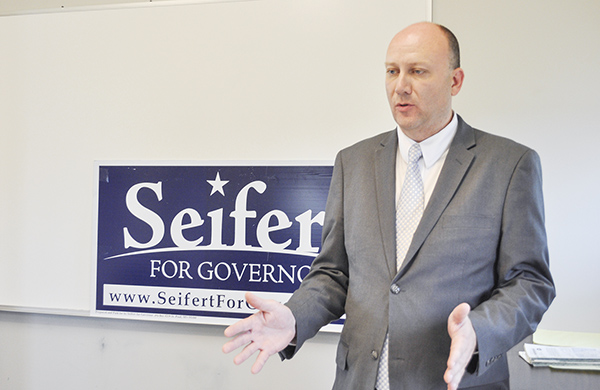 Former House Speaker Marty Seifert hopes to distinguish himself from his fellow Republicans, and from Democratic Gov. Mark Dayton, in this year’s gubernatorial election by stressing his Greater Minnesota roots and his willingness to compromise in office.

“I’m a bit of a maverick,” Seifert said during a stop in Austin Tuesday at the Austin Municipal Airport.

If elected, Seifert said he would focus on several issues over the next few years, from transportation funding to economic policy, though he said he would approach many issues with a realist perspective. That would include retooling MNsure, Minnesota’s health insurance exchange, to focus on better results. Seifert said he would hope to rebuild MNsure rather than dismantle it as MNsure is mandated by the federal Affordable Care Act.

“The bottom line is you have to have MNsure,” Seifert said.

In addition, Seifert is concerned about the state’s Common Core education standards as a policy and wishes to move Minnesota away from enacting Common Core as its curriculum policy. Common Core standards have been adopted by 44 states throughout the U.S., and Minnesota is one of six that has yet to comply with federal mandates for Common Core by 2015.

“Minnesota has got this figured out,” Seifert said. “Just like Obamacare ruined one of the best health care systems in the world … when Obamacare got brought in and mandated for our people, it made everything worse. And I don’t want our education system going from what I consider a bottom-up situation and a top-down situation.”

Seifert will face GOP-endorsed candidate Jeff Johnson, of Plymouth; businessman Scott Honour, of Wayzata; and former state House Speaker Kurt Zellers, of Maple Grove in the Aug. 12 primary to see which candidate will run against Dayton this November.