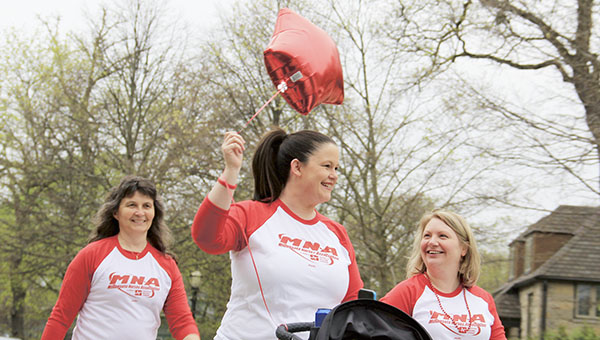 On Monday afternoon, dozens of nurses and supporters walked outside Mayo Clinic Health System in Austin to show they stand as one. 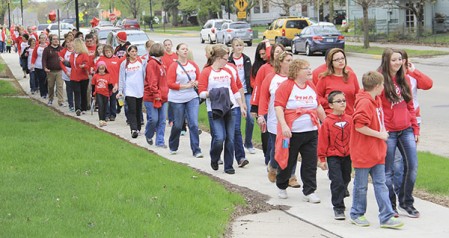 Nurses walk along First Drive Northwest with family and friends to show support for the hospital nurses negotiating team as talks continue over the contracts of 145 hospital nurses at Mayo Clinic Health System in Austin. Jason Schoonover/jason.schoonover@austindailyherald.com

More than 50 Mayo Clinic Health System in Austin nurses participated in a solidarity walk with family and friends along Eighth Avenue and First Drive Northwest Monday from around 3:30 to 6 p.m. to show support for their co-workers as they negotiate the contracts of 145 hospital nurses represented by the Minnesota Nurses Association.

“We just want the bargaining team to know that our nurses are standing with them,” said Karlton Scott, an organizer with the Minnesota Nurses Association.

The walk was relatively quiet, as there were no picket signs, chants or bullhorns. The nurses wore red and white MNA T-shirts and walked outside Mayo Clinic Health System in Austin, many pushing strollers and walking alongside their children.

Jan Rabbers, a spokesperson with the Minnesota Nurses Association, described the work as an orderly display of their strength and unity.

“It’s nurses showing collective action and power in themselves,” she said.

Nursing contracts expired April 1, but the contract is still in effect through a mutual agreement to extend talks.

The walk occurred as other nurses were in negotiations with administrators Tuesday. One nurse on the negotiating committee — who asked to not be named — spoke to the Herald via the phone and said talks were in their 11th session since March 11.

“Our nurses would all love to be a part of this and they are just showing solidarity,” the nurse said.

Most nurses were tight-lipped about the negotiation process.

“Mayo Clinic Health System in Albert Lea and Austin is currently in discussions with our Austin hospital nurses represented by the Minnesota Nurses Association,” the statement read. “We are optimistic we will reach a contract agreement acceptable to all parties and will continue working hard towards that end. We are committed to ensuring our patients receive the safest and highest quality health care. Our nurses, along with all of our providers and staff, play a valuable role in providing safe, quality care.”

This was the first solidarity walk held in Austin. Contract negotiations typically occur every two to three years.

Nurse Sara Ferguson also said they were walking as a way of “showing support for the negotiating team.” When asked about an agreement, she said she’s “always hopeful that it will be soon.”

Nurses and Mayo officials declined to give details on issues in the negotiations. Rabbers said they don’t want to negotiate in the public.

Council could add 36 parking stalls ahead of museum move

The city of Austin could add up to 36 parking stalls over the next year or so to help accommodate... read more