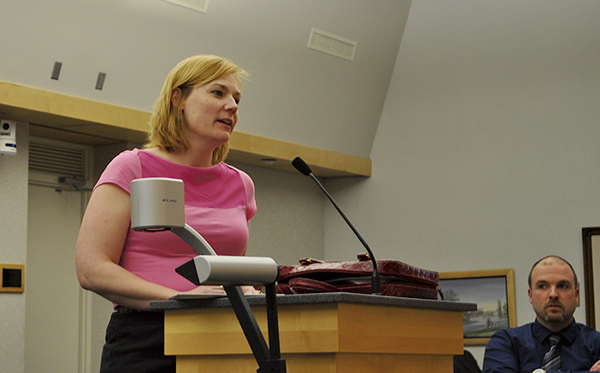 The “talent packed” logo is no more.

The Austin City Council unanimously voted down using a branding committee’s blue, Spam can-like logo for the city of Austin during the council work session Monday, three weeks after it was first publicly unveiled.

The logo garnered significant negative feedback during that time, however, as people criticized the brand and the brand committee, a subcommittee under Vision 2020.

“They took quite a beating,” Mayor Tom Stiehm said during the meeting.

It will be several months before the council considers another logo, as council members say a city website redesign needs to happen first.

The branding committee came into being as part of the website redesign request, according to Council Member Judy Enright. Enright has pushed for a redesigned city website for some time, but Vision 2020 volunteers saw an opportunity to update the city’s branding campaign to attract more businesses, as many of Austin’s local organizations had multiple Austin brands on websites and at locations.

“I don’t think any of these are necessarily wrong, but it doesn’t look like a coordinated community that knows who they are and shows that to the public,” Vision 2020’s Director of Vision Creation Laura Helle said.

Helle explained the branding committee’s decision-making process, including its decision to hire Minneapolis-based Haberman Consulting, Inc., which did market research and designed the “talent packed” logo. Though the branding committee did look at Austin-based graphic designers, Helle said the committee chose Haberman because of the firm’s expertise and staff dedicated to community branding efforts.

Yet residents weren’t pleased with the logo. An online Herald poll showed an overwhelming negative response to the logo and council members say almost all of the logo feedback they received was negative.

Several residents spoke out against the logo during Monday’s meeting.

“Before we worry about a logo, maybe we should worry about who we are,” said Brittany Perry.

Council members say they were surprised by the public’s reaction to the logo.

“I was not expecting that strong a reaction in the first place,” Council Member Janet Anderson said. “I can’t imagine that the blue can is going anywhere forward.”

Council members say the website redesign, which is meant to update the city’s online presence and provide more information in an easier way to residents, will likely move forward within the next few months. The council could decide what to do about a new logo — whether to hold a contest or take submissions, potentially around the “talent packed” idea — as early as late summer if the website redesign moves forward quickly.

From there, Vision 2020 volunteers could continue branding committee efforts. Several committee members said the committee has been dissolved. However, the city needs to adopt a new logo before other organizations can get on board with a brand campaign.

“This is good,” Stiehm said. “It’s all part of the process.”

With city approval, ban on e-cigarettes in public places…