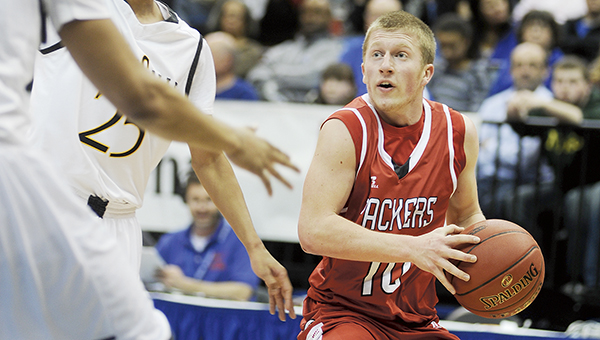 Austin’s Bret Lukes pulls up with the ball in the first half of the Packers’ matchup against DeLaSalle in the Class AAA title game of the Minnesota State Boys Basketball Tournament at Target Center. Eric Johnson/photodesk@austindailyherald.com

Austin senior Bret Lukes became the third Packer this year to commit to play men’s college basketball when he made his verbal commitment to play at Division III Hamline University recently.

Lukes was also interested in Gustavus and St. Mary’s University, but he chose Hamline after his visit went well.

“I just loved the campus and the coaching staff,” Lukes said. “I met with the players and they were all seemed nice.”

Lukes averaged 14 points, 2.5 assists and 2.8 rebounds per game this season for the Packers. Lukes played in three state tournaments with Austin and the Packers took second in state the past two seasons.

“Our year was great and knowing I’m going to play next year is a big relief,” Lukes said. “I’m excited to continue my career.”

Lukes will likely stay at shooting guard with the Pipers, who finished 9-16 overall this season, and he knows he will have his work cut out for him if he wants to play right away. Hamline returns much of its squad, including Albert Lea grad Dylan See-Rockers.

Lukes, who will receive an academic scholarship at Hamline, plans on scrimmaging with his future teammates in the near future to see where he stands.

“I worked hard in high school to get to where I was and I’ll have to keep working hard. It’ll be a whole new start and I know it will be nothing like high school,” Lukes said.

Austin will have five grads playing college basketball next season. Tom Aase and Zach Wessels will be at the University of Sioux Falls, Joe Aase will be at Minnesota State University-Mankato and Ajuda Nywesh will be at Lake Region State College in Devils Lake, N.D.