No one was seriously injured in a fire at Y Waste Removal’s repair shop Saturday afternoon. 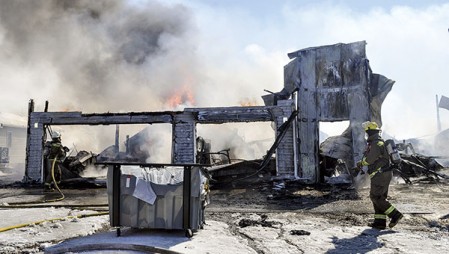 Lyle and Austin firefighters spent more than an hour battling flames at the 13400 block of 535th Avenue in rural Austin. Y Waste President and CEO David Yerhart said the repair shop, along with two adjacent garages, were a total loss.

Yerhart lives at the property and said no one was home at the time the fire started. Yerhart came back home from an errand in Albert Lea shortly before 1 p.m. when he saw smoke rising from his property. He waved a nearby driver down to ask for help and tried unsuccessfully to move a diesel truck near the burning building.

Though the diesel truck didn’t catch fire, Yerhart slightly burned his hands trying to climb into the rig.

“The heat had melted the battery,” he said.

Lyle firefighters contained the blaze to the repair shop and adjacent garages. Yerhart’s home and nearby buildings were unharmed.

“At least it didn’t take the house,” he said. “At least I’ve got my bed to sleep in tonight.”

Yerhart estimates he more than $200,000 in vehicles, rigging and tools among other things.

Austin residents, landlords, volunteers and officials had plenty to talk about when they came together for Vision 2020’s rental housing... read more