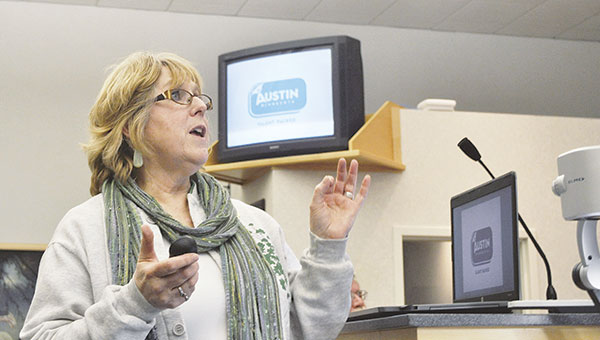 That’s how a group of Austin officials and community members see Austin, and that’s what Austin’s new branding campaign could show.

Council Members Janet Anderson and Judy Enright unveiled a new logo for the city of Austin to the Austin City Council during its meeting Monday. The logo, reminiscent of a Spam can, is the result of more than a year’s worth of work and input from Austin residents.

“We kept looking for something that you couldn’t just put in any city name,” Anderson said.

The group interviewed residents around town and contracted with Minneapolis-based Haberman Consulting to discuss how best to represent Austin. The last Austin logo was created more than 20 years ago and the city has several logos and phrases, including Austin’s title as “Spamtown USA.”

Anderson and Enright said the group wanted the new logo to be used by several local organizations, and thus reflect the city’s diverse and innovative background.

“We know that we have a lot of talent here in town,” Enright said.

To that end, the group decided to incorporate Hormel’s contributions to the city through a Spam-like design.

The branding committee, a subcommittee under Vision 2020, has presented the new logo and campaign emphasizing Austin’s innovative side to several groups, including the Convention and Visitors Bureau and the Austin Area Chamber of Commerce. Thus far, Anderson and Enright said many people have reacted positively to the new logo.

However, it could take time before the logo is seen throughout the community. The council will discuss whether to use the logo at its April 7 work session, and branding committee members say the logo’s color could change as groups like Austin High School, whose colors are red, may want to use the blue logo in some form.

The logo would replace city logos on letterhead, city vehicles and buildings on an as-needed basis.