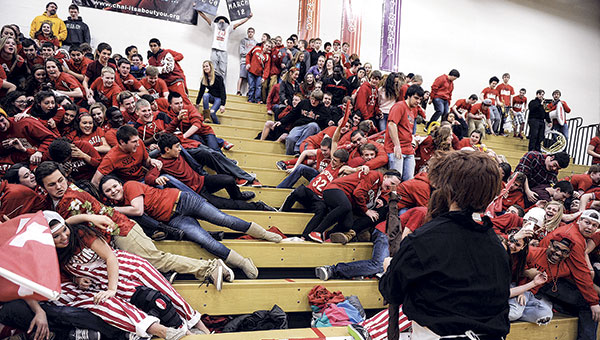 Calling itself the “Red Sea,” the Austin student body fan base parts for Moses (Austin student Mark Mizrachi) to reveal Ryan Synoground holding the tablets proclaiming Austin’s return to state before the Packers’ semifinal game win over New Prague Saturday night in Packer Gym. Top-seeded Austin will take on No. 2-seeded Red Wing in the Section 1AAA title game at Mayo Civic Center Friday at 8 p.m. The Packers are aiming for their third straight trip to the state tournament. 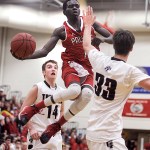 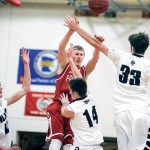 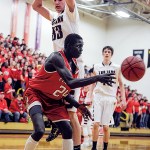 Austin’s Gach Gach dishes underneath against the pressure of New Prague’s Michael Soderlund in the second half of their Section 1AAA semifinal game in Packer Gym. Eric Johnson/photodesk@austindailyherald.com 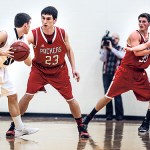 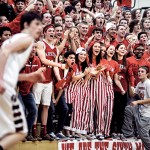 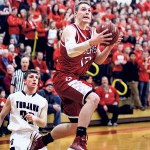 Packers one step closer, as the ‘Red Sea’ predicts return to state

Austin senior Ajuda Nywesh was in one of his zones Saturday and that’s always a good thing for the Packers.

Nywesh went on a scoring frenzy as he tallied 29 points and grabbed five steals as the Packers rallied past No. 4 seeded New Prague 79-64 in a Section 1AAA boys basketball tournament semifinal in Packer Gym.

Nywesh, who scored 19 points in the first half, hit three 3-pointers to start the contest and then he went on the attack. Nywesh converted two steals for layups to put Austin up 32-26 and 38-30 in the first half. Nywesh was 11-for-15 from the field and he was 5-for-6 on 3-pointers.

“I wasn’t really focused on [New Prague],” Nywesh said. “I was just playing and I had open looks. I was reacting and [Zach] Wessels was looking for me. It was exciting.”

Wessels, who had 16 points and 11 assists, hit back-to-back 3-pointers in the second half to put Austin up 58-52 with 7:32 left in the game and Bret Lukes added a dagger 3-pointer form the baseline to make it 61-52. The Trojans never got closer than seven the rest of the way.

Lukes, who had eight points, said he was feeling nerves with this being his last game in Packer Gym and it didn’t help when Trojans jumped out to 17-11 lead in the game’s first eight minutes.

“For me it was a relief [to win this game]. We just wanted to come out and play good. I’m speechless right now, it’s a good feeling,” Lukes said. “We knew they were a good team, but we wanted to come out fast. They kind of threw the first punch and were hoping we would do that. We recovered nicely.”

The Trojans (9-18 overall) had a major size advantage up front, but the Packers (25-3 overall) were able to hold their own up front in the second half. Gach Gach was a major factor as he had 11 points, five rebounds and two steals and Curtis Oberbroeckling and Noah Brehmer stepped up their defense in the second half.

“We just tried to stop their big guys,” Gach said. “We didn’t do that well in the first half, but in the second half we shut them down. It was just a matter of time [for our offense]. Everybody can shoot on this team and eventually we were going to start hitting.”

The Packers forced 23 New Prague turnovers in the win and Austin shot 58 percent from the field and 44 percent on 3-pointers.

“I’m happy with the whole team,” Austin head coach Kris Fadness said. “I thought we answered the bell. Every time we were about ready to get going, [New Prague] hit a three in the corner or they made a play inside. Wessels hit two big threes and when Bret hit that three in the corner that was probably the biggest shot in the game.”

Top-seeded Austin will take on No. 2 seeded Red Wing Section 1AAA title game in Mayo Civic Center Friday at 8 p.m. The Packers are aiming for their 3rd straight trip to the Class ‘A’ state tournament.