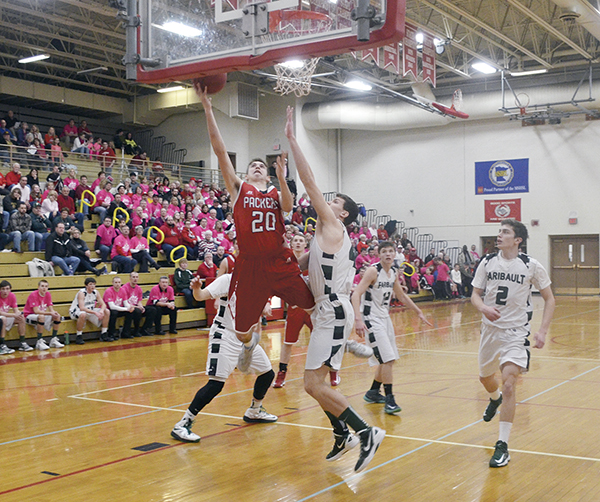 The Packers showed exactly how badly they wanted to prove they were the best team in the Big Nine in Rochester John Marshall Tuesday night.

With one conference game remaining on the schedule, Austin didn’t have to beat the Rockets to win its third straight Big Nine title outright, but it wasn’t going to leave any doubt. 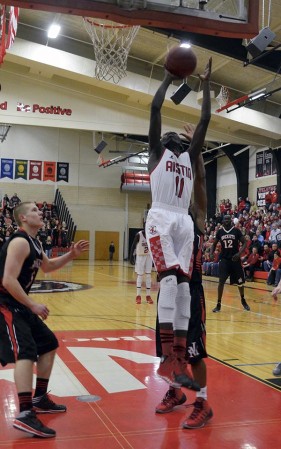 “It’s exciting. Not many high school players get to have moments in big games like this,” said Nywesh, who had 13 points and eight rebounds in the win. “There was no doubt [in our minds]. We just blocked it out and tried to play our game. We needed a game like this to get things going.”

The Rockets agave the Packers everything they had as they shot 63 percent (10-for-16) on 3-pointers and led throughout much of the second half. JM sophomore Michael Hurt scored 27 points on 11-for-13 shooting, but even that wasn’t enough to keep the Pack at bay.

“This is a really competitive group,” Austin head coach Kris Fadness said of his team. “JM played lights out and they did a nice job of attacking our zone. Michael Hurt was outstanding. We had to find a way to get stops and thankfully we forced turnovers down the stretch.”

JM took a 60-51 lead with 5:20 left in the game when Kyle Gossman hit a 3-pointer, but that would be the last point the Rockets would score. Gach Gach and Bret Lukes each hit a pair of free throws to close the gap to 60-55 and then Austin’s defensive pressure took over.

Nywesh scored on a a put-back off a turnover to make it 60-57 with 1:23 left in the game and 12 seconds later Zach Wessels was sweeping in for a layup off a steal that made it 60-59. Wessels caused another JM turnover with 57 seconds left when he forced a jump ball as the Rockets were trying to run clock.

“We knew they were shooting it well, but we fought hard and didn’t quit,” said Wessels, who had 22 points, three assists and three steals. “That’s what won us the game. We pushed our press up and that worked. It got them kind of scared I guess. They’re the second best team in the conference and it was a great environment. To come back with that run was great.”

Fadness figured his squad was going to be in the mix for the Big Nine Conference title this season, but the Packers may have even surprised their own coach with how dominant they were in the conference this season. Austin has now won 12 straight games and it hasn’t lost a Big Nine contest in its last two seasons.

The Packers knew that the guard trio of Wessels, Nywesh and Bret Lukes, who scored 12 points Tuesday, would be a big factor this season. But other players have grown stronger as the year has gone on.

“We’ve got some guys who have exceeded my expectations,” Fadness said. “Noah Brehmer has been really good and Gach has gone to a level I didn’t know he had in him. HIs ceiling is getting further and further away and he just gets better and better. Ajuda seems to get better every game and Nik Gasner has been a pleasant surprise with his shooting this year. We’re better than I thought we would be coming in.”

Gach, who was a reserve on last year’s team that went to state, has blossomed into an athletic force that patrols the paint on defense for the Packers. His arsenal was in full effect on Tuesday as he had a big, physical finish over JM’s 6-9 center Ngor Barnaba that ended up being a 3-point play to cut JM’s lead to 22-20 in the first half. Gach also showed his finesse as he drilled a base-line 3-pointer that made it a 57-51 game late in the second half.

“It was great to get big ‘W’ after being down big on the road. We had the heart to come back and win,” said Gach, who had 10 points and six rebounds. “This goes down as one the best games I’ve played in. It’s exciting and it’s up there with state.”