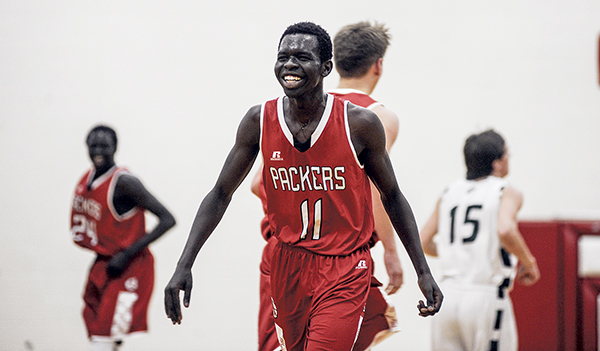 Austin’s Ajuda Nywesh was all smiles Thursday night as the Packers went on to beat Faribault 73-42 in the first round of the Section 1AAA tournament in Packer Gym. Eric Johnson/photodesk@austindailyherald.com

It was business as usual for the Packers as they cruised past No. 8 seeded Faribault (2-25 overall) 73-42 in Packer Gym in Section 1AAA quarterfinal boys basketball game Thursday. 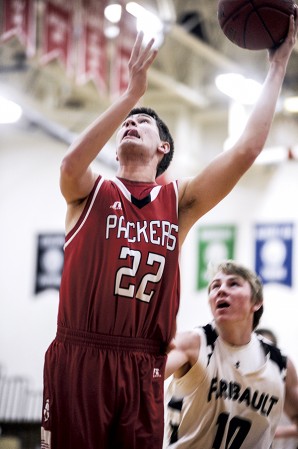 Austin’s Jacob Kempen gets a quick shot underneath against Faribault in the Section 1AAA playoffs Thursday night in Packer Gym. Eric Johnson/photodesk@austindailyherald.com

Faribault was within 28-17 halfway through the first half and the Packers responded with a commanding 16-2 run.

“We had to turn it up a little bit because we don’t even want them to compete with us. We just want to show that we’re a team to be reckoned with,” said Austin forward Nik Gasner, who had nine points. “We knew we would have opportunities against their zone. We got a lot of clean looks and we had confidence in each other.”

Six different Packers had at least one 3-pointer in the win.

“We just came out to play our game. When we get stops on defense we get good shots,” Nywesh said. “It was a good overall team win to enjoy and now we’ve got to focus on who we’ve got next. Whoever’s in our way we’ve got to get past them.”

Austin has now won 13 straight games since it lost a home game to Caledonia. The Packers will host a Section 1AAA semifinal game against New Prague Saturday at 7 p.m. Austin beat the Trojans 60-45 Nov. 26.

“One bad night and it’s over,” Austin head coach Kris Fadness said. “For our seniors it’ll be their last time on our home floor and it would be nice to have a big crowd to support us. Those guys have done a lot for our program. Our guys have played in some big games in big venues and we’ve played pretty darn well since the second half of the Caledonia game.”