Austin senior Zach Wessels began his high school basketball career as a freshman who was thrust into the Packers’ starting lineup as a youngster.

On Friday, Wessels hit a milestone he could’ve only dreamed of when he was a freshman. Wessels surpassed his former teammate and current Davidson College forward Joe Aase as Austin’s all-time leading scorer. Wessels hit the mark when he drained a pair of free throws to help Austin seal a 56-44 win over Albert Lea in Packer Gym Friday. 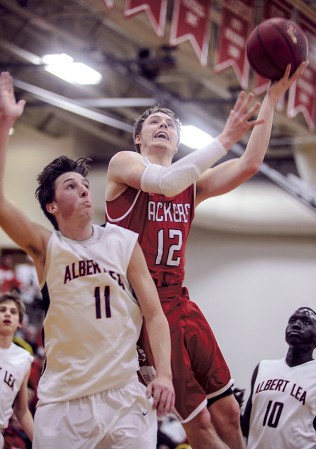 Austin’s Zach Wessels’ goes over Albert Lea’s Tyler Vandenheuvel for two in the first half Friday night in Packer Gym. Wessels became Austin’s all-time leading scorer after a pair of freethrows late in the second half. Eric Johnson/photodesk@austindailyherald.com

“It’s been a long trip, but a fun trip,” said Wessels. “It’s a shame that it’s closing in on me. But knowing I’ve been so successful is a great thing.”

Wessels now has 1,341 career points, but his game has never been all about scoring. Wessels added four rebounds, three assists and three steals in Friday’s win. He never has trouble passing up a good look if one of his teammate has a great look.

“I would rather take a win and score two points than score 25 points and get a loss,” Wessels said. “I’m about the team and not myself.”

For Wessels it’s all about winning and since he’s played for Austin, the Packers have gone 81-22 overall, played in two state tournaments and played in one state title game. Austin has also won the last two Big Nine titles and it currently leads the Big Nine this season.

Before Wessels arrived it had been 30 years since Austin had played in the state tournament.

“He’s made me look good,” Austin head coach Kris Fadness said of Wessels. “It’s not about the scoring, it’s about the wins. He’s a highly competitive kid and I think guys have so much confidence playing with him. He’s a good leader and he’s going to be one of the best Austin’s ever had.”

Wessels’ competitiveness showed in the way he reached the scoring record on Friday. After struggling on some late free throws in a very rare home loss to Caledonia Jan. 11, Wessels made it a point to get in the gym early to work on free throws. Wessels has gone 15-for-17 on free throws in his last two games.

Austin sophomore guard Zach Coffey has been getting in the lineup more often recently and there’s no better player for him to learn from than Wessels.

“He’s a great leader and a great player to model your game after,” Coffey said. “He’s a really good player and he pumps up the team.”

Wessels wasn’t exactly focused on breaking the Packer scoring record, but when the game was stopped and the student section went wild, Wessels couldn’t help but feel a little emotion.

“Knowing that all my friends and family were all behind me was real nice to know,” Wessels said. “I just want to thank the students, the parents, my family and my friends for being there throughout the whole process for me.”

Wessels will play basketball at the University of Sioux Falls, S.D. next season.

Packer wrestlers fall to No. 6 Owatonna

The Austin wrestling team lost 59-6 at Owatonna, which is ranked No. 6 in Class ‘AA,’ Thursday. Brandon Cotter and... read more