The No. 4 ranked Packer boys basketball team had its struggles with Albert Lea, but they finished the game with a 56-44 win in Packer Gym Friday.

Austin (14-3 overall, 9-0 Big Nine) led 35-20 at the half after Zach Coffey hit a runner on a put-back to beat the halftime buzzer. Austin’s offense went south for a long stretch in the second half as the Tigers (4-12 overall, 2-7 Big Nine) pulled to within 39-30 halfway throughout the second half. 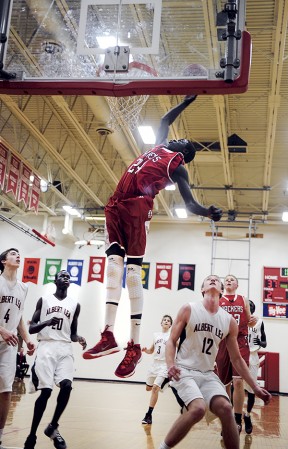 Austin’s Gach Gach reaches back on an attempted dunk off a pass from Zach Wessels Friday night during the second half against Albert Lea. Gach just misssed on the dunk. Eric Johnson/photodesk@austindailyherald.com

The Packers scored just four points in the first 10 minutes of the second half and Zach Wessels snapped them out of that streak when he got free for a lay-up.

Austin’s Bret Lukes was saddled with foul trouble for much of the first half and Gach Gach fouled out of the game.

“The foul trouble really hurt us. It took two of our scoring threats out,” Austin head coach Kris Fadness said. “When most teams run a zone we can move Wessels around a little bit, but with the foul trouble we kind of had to keep him on the perimeter. We didn’t do a real good job of attacking, especially inside the zone and we missed some bunnies.”

The Packers struggled to get near the rim against AL in the second half and the Tigers dominated the glass. AL held a 39-23 rebounding advantage on the night.

“They kind of pressed up their zone a little but and we kind of got a little flustered, but we still got the W,” Coffey said.

Austin struggled with AL in the teams’ first meeting Dec. 10 when the Packers had to use a late rally to win 66-53. Fadness wasn’t sure why the Tigers give the Packers a tough matchup.

“I don’t understand it,” Fadness said. “We wonder why they don’t beat other teams because they always play us well. I can’t figure them out. We scout them and they don’t play this hard, then they play us and they’re into it and they play hard. They play us tough.”

Coffey has played a lot more for the Packers as of late and he’s starting to feel more comfortable playing at the varsity level. HIs buzzer beating shot gave him a boost of confidence at the end of the first half.

“It was kind of cool and everybody was pumped after that. It kind of turned the momentum,” Coffey said. “I feel like I’m getting smart with the ball and I’m meshing in with these guys.” 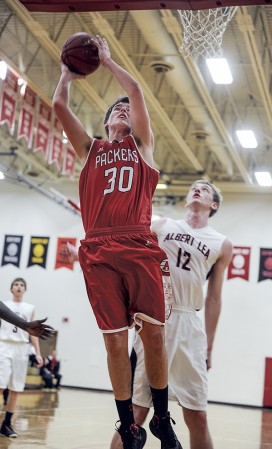 The Lyle-Pacelli boys basketball team let another close game slip away when they lost 76-71 in overtime to Hope Lutheran... read more