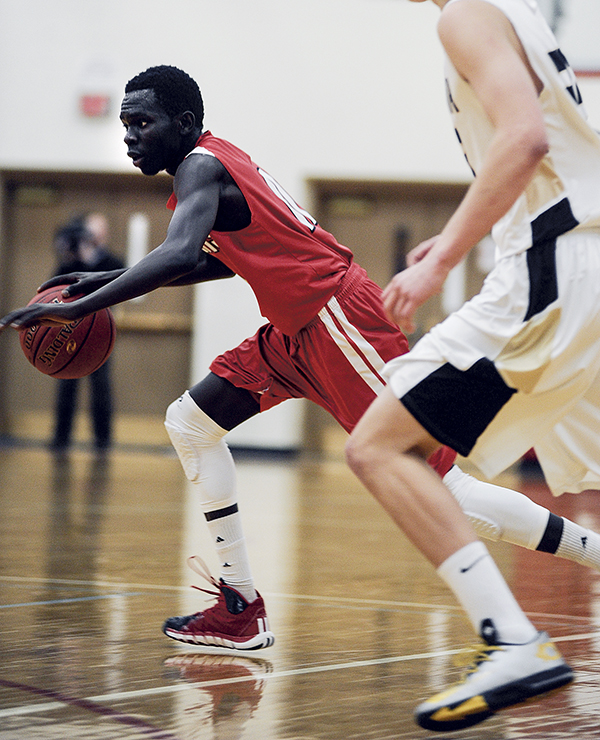 Austin’s Ajuda Nywesh moves the ball out near the arch during the first half against Caledonia Saturday night in Packer Gym. Eric Johnson/photodesk@austindailyherald.com

The Austin boys basketball did something on Saturday that it hadn’t done since March of 2011 Saturday – it lost a home game.

The No. 4 Packers struggled early on and their furious second half comeback came up short as they lost 62-59 to Caledonia to snap their 31-game home winning streak in Packer Gym. 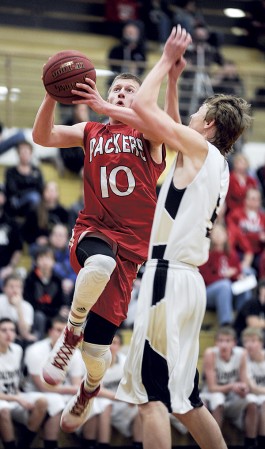 Austin’s Bret Lukes heads to the hoop against the defense of Caledonia’s Josh Nord during the first half Saturday night at Packer Gym. Eric Johnson/photodesk@austindailyherald.com

Bret Lukes and Zach Wessels missed game-tying 3-pointers on Austin’s final possession, but there were many reasons why Austin (10-3 overall) fell short. Austin shot just 3-for-22 in the first half as it shot 18 3-pointers, and made some fundamental mistakes. Caledonia (11-1 overall), on the other hand, played really well.

“Caledonia played great and they treated it like the Super Bowl. We came out flat,” said Wessels, who had 12 points, six rebounds, nine assists and five steals. “We had a pretty good second half. We showed great fight, but it just wasn’t our day I guess. I feel in the long run this will be better for us. We can’t start slow and we’ve got to stay tough all game.”

Austin took a 57-56 with 2:40 left when Ajuda Nywesh, who had 19 points, three assists and four rebounds, pump faked and hit a 3-pointer, but Caledonia responded when eighth grader Owen King drained a 3-pointer to make it 59-57 Caledonia with 2:06 left.

“They’ve got some shooters. Their eighth grade kid won the game for them. He hit shots,” Austin head coach Kris Fadness said. “You’ve got to give them credit. They’re a good team. For the first 18 minutes they dominated us and the last 18 we probably dominated them, but they had a enough resolve to finish the game out. They were better tonight.”

After falling behind 25-11 going into the break, Austin pulled to within 27-24 with a 13-3 run to open the second half. But Caledonia kept making big shots to stay ahead. Austin finally took its first lead of the night when Noah Brehmer hit a 3-pointer to make it 54-52 with 3:59 left.

Austin opened the game by making just one field goal in the first 11 minutes of the game and it trailed 14-3 with 8:18 left in the second half.

Fadness wasn’t pleased with his team’s start, but he also wasn’t happy about some of his team’s possessions in the second half.

“In the first half we were awful. We didn’t even threaten near the basket and we couldn’t make shots,” Fadness said. “The thing we’ll address Monday is there are multiple times we tried to run a play and we didn’t run it the way it was supposed to be run.” 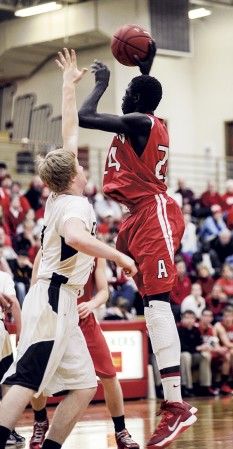 Austin’s Gach Gach dumps off a pass during the first half against Caledonia Saturday night in Packer Gym. Eric Johnson/photodesk@austindailyherald.com

Rebel girls knock off No. 5 Dover-Eyota

When this season began, the Southland girls basketball team was talented, but inexperienced. That’s starting to change. The Rebels rattled... read more