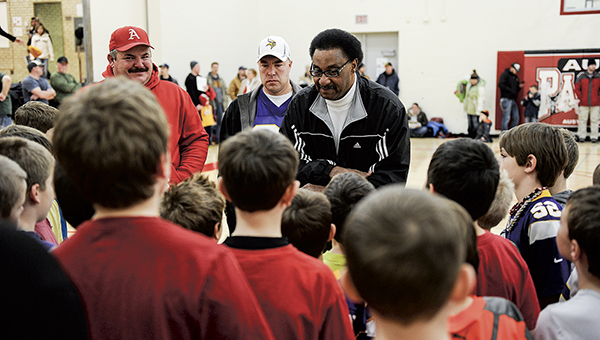 Former Minnesota Viking Chuck Foreman talks to kids before sending them off for drills during a camp by himself and another former Viking, Carl Lee Saturday morning at Ellis Middle School. Eric Johnson/photodesk@austindailyherald.com

When Austin youth football coach Jeff Hovland handed out the jersey No. 44 to one of his players this previous football season, he explained to his player that No. 44 was the same number as one of the greatest Vikings of all time – Chuck Foreman. 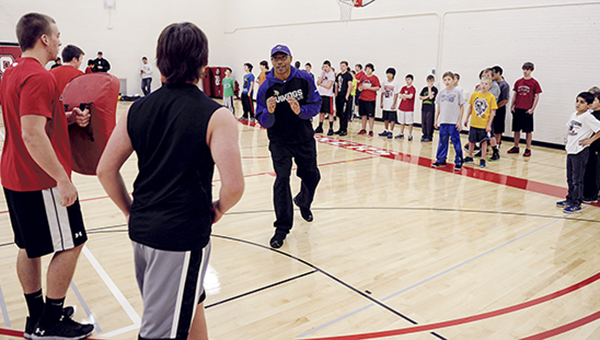 Former Minnesota Viking Carl Lee tells Sam Johnson, 13, what he did right in a drill Saturday morning during a camp put on by Lee and Chuck Foreman at Ellis Middle School. Eric Johnson/photodesk@austindailyherald.com

Of course, the youngster had no idea who Foreman was as Foreman played running back for the Vikings in the 1970s when he won two NFL MVPs and played in three Super Bowls. But on Saturday, that Hovland’s youth football player and at least 100 other Austin youths got to meet Foreman and former Viking corner back Carl Lee as the two Viking greats held a youth football camp in Ellis Middle School.

“It’s great for (kids) to have mentors and people to look up to,” Hovland said. “When you see Vikings, these kids come in here and they look up to them. The big thing is to get them working on fundamentals and the little things to build a foundation to get better.”

Foreman said the camp’s purpose was to teach kids the basics of football as it focused on how to wrap up and tackle, how to get out of a stance, and how to have fun. Foreman was especially impressed with the turnout, since a lot of the camp goers only found out about it a day or two in advance.

“This is a great turnout and that’s a great indicator of what your football team is going to be like in a few years,” Foreman said. “Getting the community involved is a great plus and it looks like they’ve got great leadership, because the older [football players] are out here helping out.”

Lee, who was drafted by Minnesota in 1983, was a three-time Pro Bowler for the Vikings and he coached for 10 years at West Virginia State University after his playing days. He was glad to get back to coaching youngsters on Saturday.

Lee’s focus was on teaching kids how to hit safely and enjoy themselves.

“When you see a kid who is grasping it and you tell him something and he does it,” Lee said. “You start to see that he’s got it and you start to feel good about it. It’s a reward to teach them.”

Brandon Lawhead, a friend of both players, helped set up the camp when he found out Lee and Foreman were going to part of the All-Dome team over the weekend. It took some quick thinking and quick action to make the camp a reality in just span of a two week notice.

“Superintendent [Dave] Krenz and coach [Brett] Vesel were very open to this and it shows that they’re pushing forward on things,” Lawhead said. “They really helped to make this happen and we have a business community that’s more than willing to make this happen in Austin.”

The camp gave Vesel and his coaching staff a good chance to talk football with Foreman and Lee and Vesel couldn’t have been happier about the opportunity.

“Chuck Foreman was my man and Carl was a good player for us,” Vesel said. “I’m an avid Viking fan and it’s awesome to see those guys come back and give back to the community. It’s great to see there are other people in this world that are as crazy about football as I am.”