No. 5 Packers take down No. 3 Wingers 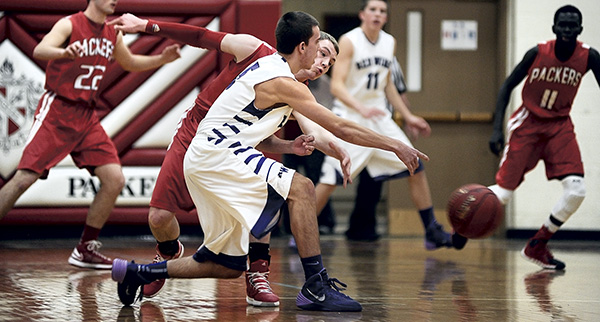 The Packer boys basketball team made about as big of a statement as a team can make in late December, but they weren’t letting it get to their heads after they beat No. 3 ranked Red Wing 53-37 in Packer Gym Friday.

Austin jumped out to an 11-3 lead early on when Gach Gach sank two straight 3s and Ajuda Nywesh knocked down another 3.

“I was feeling it during warm-ups and I thought I could bring it to the game,” said Gach, who finished with 10 points, five rebounds and three blocks. “That gave everybody motivation and it gave us a quick lead.”

The Wingers (7-1 overall) never got closer than five the rest of the way as they shot just 16 percent (3-for-19) and committed 16 turnovers. Austin’s defensive pressure had a lot to do with that, but Austin head coach Kris Fadness said it may have been a different game if the Wingers had found their shooting touch.

The No. 5 ranked Packers (6-1 overall) have now won 30 straight home games and the Wingers, who took Austin to overtime in the Section 1AAA finals last season, will be one of the better teams to come into Packer Gym this winter. But Nywesh, who scored 21 points and went 7-for-8 on free throws to ice the game, said the team wasn’t stressing out about the game.

“We treated it like a normal game. We just went in and did what we normally do with our daily routine,” Nywesh said. “Those shots to start the game were big and then the sixth man, our fans, got into it. We thank all of the people who came out and gave us a boost.”

Gach continued to make big strides in the win for Austin. Besides knocking down three 3-pointers, he also played strong defense and gave the Packers a boost on the boards. Gach put an exclamation point on the win when he blocked a Red Wing shot into the fourth row of the crowd with a minute to go.

“Gach got us going,” Fadness said. “He’s getting better every day and he got the crowd going. I’m really proud of Gach and the strides he’s making as a player.”

Austin led by as many as 15 in the second half, and the closest the game got was 44-37 when Red Wing’s Ty Buck hit a 3-pointer with three minutes left. 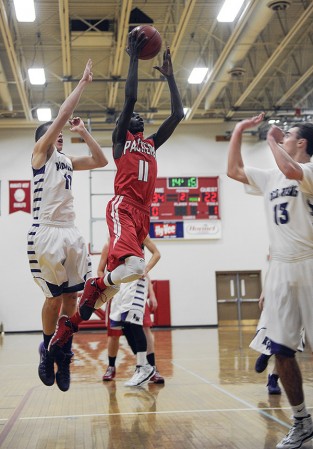 Austin’s Ajuda Nywesh goes in for a layup in the second half against Red Wing Friday night in Packer Gym. Eric Johnson/photodesk@austindailyherald.com