The Austin boys basketball team locked down on defense and led for most of the night as it beat Rochester Century 64-40 in Packer Gym Tuesday. 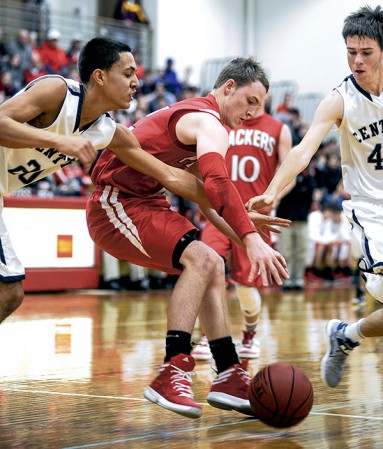 Austin’s Zach Wessels scrambles after a loose ball during the first half against Rochester Century in Packer Gym. Eric Johnson/photodesk@austindailyherald.com

Austin (5-1 overall, 3-0 Big Nine) forced 25 turnovers and plenty of those led to breakaway opportunities as the Packers took a 28-14 lead into the break.

“I liked our energy tonight. Defensively we were good the whole game,” Austin head coach Kris Fadness said. “(Zach) Wessels created a lot of pressure up top and were swarming tonight.”

“It’d be nice to be a starter but I like to come in and bring energy to the team,” Gasner said. “If a guy is cold I can come in and make some threes and take some pressure off the starters.”

On defense, the Packers got a big boost from Gach Gach as he racked up seven points, six rebounds and six steals.

“That’s what I worked on all offseason to get better at. It’s finally paying off,” Gach said. “We’ve all got to rebound more, because if we do that we’ll most likely win.”

Fadness said Gach has made big strides on the defensive end of the floor and he expects the junior forward to get even better as the season rolls along.

“He’s come a long way,” Fadness said. “He’s playing with so much more discipline than what he’s done in the half. I’d like to see him become more of a scorer and I think we’ll see that in time. He just gets a little amped up.”

The Panthers (4-4 overall, 2-2 Big Nine) hit a 3-pointer to start the game, but Austin quickly tied it up and Century was never single digits in the second half.

The Packers had a couple of quick offensive bursts, but they still haven’t been able to put together a long run like they did so often last season.

“We haven’t had a game were we’ve kept a streak going, but today we looked a lot better than Saturday and we played a lot better in the second half,” Gasner said. “It’s getting there.” 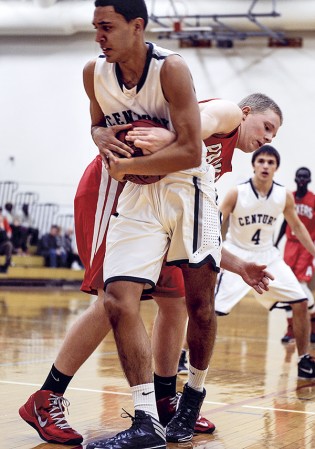 Austin’s Curtis Oberbroeckling in a battle for the ball with Rochester Century’s Brandon Bocanegra during the first half Tuesday night in Packer Gym. Eric Johnson/photodesk@austindailyherald.com

No. 3 ranked Austin has two more home games this week as it will host Mankato East Thursday at 7:30 p.m. and No. 5 ranked Red Wing will come to Packer Gym Friday at 7 p.m.