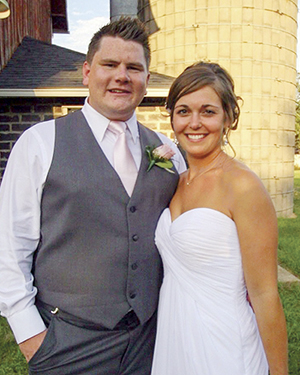 Emily is the daughter of Michelle Heichel (Dowd) and Rayce Hardy. She is a 2006 Mankato West High School graduate and a 2010 University of Minnesota graduate with a major in biology and Spanish. She is studying optometry with the class of 2016 at Western University of Health Sciences in Pomona, Calif.

Randall is the son of Kay and Pete Enright. He is a 2002 Geneseo High School graduate and 2006 State University of New York-Potsdam graduate with a major in education and Spanish. He is currently in the master’s program at California State University-Fullerton for educational leadership. He works at Bonita High School as a Spanish teacher.

Grandparents are (bride) Bill and Darlene Hardy of Austin, Michael Dowd and the late Shirlee Dowd of Austin.

Emily and Randall married July 20, 2013, at the home of Carter and Meg Wagner in Austin, Minn. The couple will make their home in Pomona.