Students Rev it up for Hormel 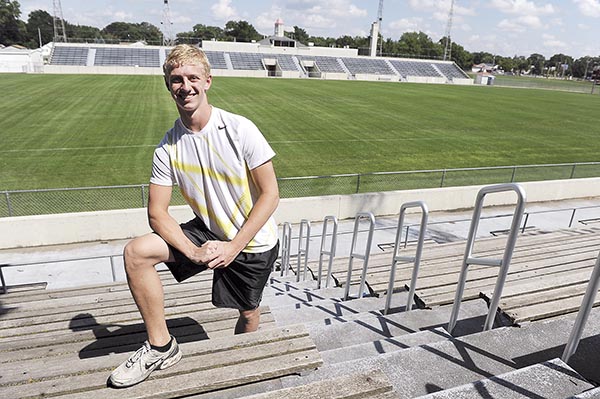 Austin High School students in a marketing class have helped Hormel develop some of the design for the Rev wrap advertising. Alex Laury, who graduated this past spring from Austin, is featured prominently on the ad working out in Art Hass Stadium. Eric Johnson/photodesk@austindailyherald.com

When readers browse through People Magazine or a number of other national publications, they’ll discover a new grab-and-go product from Hormel — and with it, a little taste of life at Austin High School.

Alex Laury, who graduated from Austin High School in May, was one of two students selected this summer to appear in ads for Rev, the new, ready-to-eat product from Hormel Foods.

An image of Laury sprinting up a set of bleachers at Wescott Field is now running in print ads across the country.

Austin graduate Alex Laury is seen running up the bleachers at Art Hass Stadium in this ad for Hormel’s Rev wraps. Photo provided

Rev, a wrap that combines cheese, deli meat and flatbread into a refrigerated package, is a first for Hormel, whose fridge items mostly consist of cuts of pork and turkey, and comes in eight varieties, including meat lovers pizza, italian Style Ham and Peppered Turkey.

It’s being marketed particularly to teenagers as a snack, while other brands’ products, like Kraft Foods’ Lunchables, tend to target younger children.

“As teens are so active in moving from activity to activity, they need real fuel from real protein to keep them performing at their best,” Holly Drennan, senior product manager of refrigerated foods division said.

Drennan said the ad featuring Laury conveys the sense that continual hard work and putting in time after hours is what leads to success, not just throwing the winning touchdown.

The same concept holds true for a second set of upcoming advertisements featuring Melissa Navoa, also a 2013 AHS graduate. Navoa will be shown practicing her cello late into the evening, Drennan said, putting in the time necessary to improve at her art.

“Right now we’re in process of working through the rotation of the ads,” Drennan said.

Laury and Navoa were not chosen at random. As seniors at AHS, both were in a marketing class that had collaborated with Hormel on the new product on an ongoing basis for the last two years.

The students offered early input on Rev’s design, branding and taste. They also helped Hormel decide which flavors would be most relevant to teenagers, Drennan said.

Laury said the idea behind Rev was to cater toward the mobile, activity-packed lifestyles of many students.

“They had learned that teenagers, when they’re done with a sport … they just want to eat anything they can find,” he said.

BBDO Proximity Minneapolis, an ad agency in the Twin Cities, held a pre-photo shoot where they snapped pictures of all the boys and girls up for consideration in the ad. Drennan said using local teenagers kept an authentic feel to a product that was developed in Austin.

Laury was later accepted as the campaign’s athlete because his body type fit what the advertisers were looking for. He said the ad was shot early in the morning, it was a good feeling to see everyone coordinate their time and focus to make him part of it.

“We dedicated a lot of time to it,” he said, adding the whole process was more complex than he expected and took about four hours.

The Rev campaign was the first time Laury had ever been a model in an advertisement. While some may be nervous at the thought of seeing themselves appear in publications across the country, he said he was happy to have the opportunity.

“I’m more excited than anything,” he said, adding he would consider modeling for another ad if the right opportunity came along.

While Laury and Navoa will only appear in print ads, the Rev ad campaign as a whole will cover other media formats, including television.

Hormel is likely to continue a partnership with the marketing class at AHS, Drennan said.

“It’s an exciting opportunity to engage with local community,” she said. “We’re really excited about this being one of the biggest new product launches in Hormel history.”

Pacelli Catholic School, aided by the Hormel Foundation, made its alumni and community proud on July 24 when it met... read more