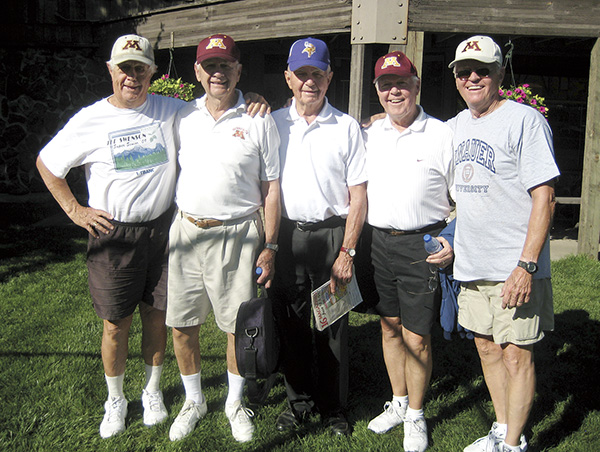 The Knauer brothers gather during their 2012 reunion in Nisswa, Minn. From left: Tom, Don, Gene, Bill and Jack. They will return to Austin for Pacelli Catholic Schools’ 100th anniversary celebration on Aug. 24-25. — Photo provided

Five Austin Catholic school alumni will journey hundreds of miles to reunite at their childhood stomping grounds — and catch up with some old classmates while they’re at it.

The Knauer brothers, who all grew up in Austin and graduated from what was then called St. Augustine High School, will return Aug. 24-25 for Pacelli Catholic Schools’ 100th anniversary celebration. The weekend reunion will be twofold for Don, Gene, Tom, Bill and Jack, as the brothers will combine their own yearly family gathering with their alma mater’s centennial.

“This hundredth anniversary made it great for us to have the class reunion and our get-together,” Bill said. “I am so glad that it’s come together.” 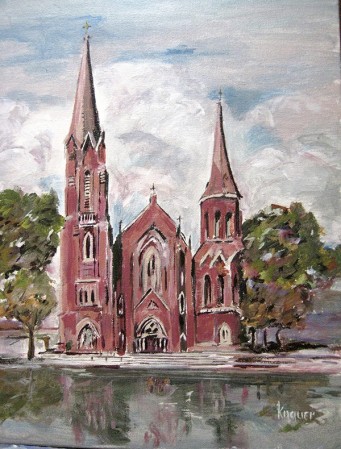 Bill Knauer has painted a picture of St. Augustine Church. He plans to sell prints of the painting to help raise funds for Pacelli. Photo provided

“It was one of the greatest experiences of my life,” Bill said.

His oldest brother, Don, of Eden Prairie, agreed. He remembers classes taught largely by nuns back then. There were four classrooms, along with a library and a lab.

“I found it a very rewarding school,” he said.

Tom, who now lives in Westminster, Colo., spoke fondly of his teachers, and remembers trips to see movies at the Paramount Theatre.

The brothers are flush with memories of their days in Austin. Don recalls the camaraderie he felt with the others in his graduating class, whether they were going out to the prom or attending a sporting event.

“The students were all friends,” he said.

St. Augustine was big into athletics when the Knauers attended, and the brothers took part in their share of sports. Gene, for example, played on the school’s football and basketball teams. More than one Knauer earned the nickname “Mouse” because of his short stature as a teenager.

“I warmed the bench, as they say,” Bill laughed.

They also joined orchestra and choir. Bill played coronet, and Tom the clarinet. And Bill was the editor of the Shamrock, the school’s paper.

Outside of school, the neighborhood children spent a lot of time together. Tom said they often gathered for football games in the street, and there was a field only two blocks away where he played in the summer baseball program.

“I could remember having snowball fights across the street from Austin High School,” Bill said.

In the 40s and 50s, Tom said, there was a social distance between Austin’s Catholic and non-Catholic students.

“Things have improved considerably since then,” he said.

Don remembers there were about 24 students in his senior class, though that number dropped to 21 before the end of the year came about.

“A couple left before graduation to join the armed services,” he said.

Don himself enlisted in the armed forces in 1943 and spent almost three years in the European Theatre. He had hoped to become a pilot, he said, but the armed forces had too many already. Instead, Don was switched to infantry.

Fortunately for him, he had taken typing in high school — a skill not many men had at that point. While he stayed near the front lines, the talent kept him out of the firefights. When he returned from his service, he went to community college in Austin for two years before leaving in 1948 for the University of Minnesota. Gene would later attend the U of M as well, after Loras College in Dubuque, Iowa.

During their teenage years in Austin, the Knauers held various jobs. Several worked at the Hormel plant, and Don and Gene were both local carriers for the St. Paul Pioneer Press. Bill and Jack, on the other hand, delivered the Austin Daily Herald.

Jack drove the chicken delivery truck for the east side’s Midway Market, which his uncles Paul and Louie Knauer owned.

“He has some hilarious stories,” Don said, remembering a time when a crate of chickens fell from the delivery truck in-transit.

Though the brothers have all moved away from Austin, they continue to carry their childhood experiences with them. Bill, for example, went on to spend 42 years in the food industry.

“I knew something about food through Hormel, through Knauer’s Market,” he said.

While Tom’s classmates became doctors, priests and nuns, the spirit of education stuck with Tom himself. He spent his working life as a public school administrator, and at one point was also a Catholic school principal.

The people they met in Austin also remain in their lives. Monsignor James Habiger was just out of seminary when he came to teach at Pacelli. Bill said his class “broke him in“ as a high school teacher. Years later, Habiger went on to baptize Bill’s grandchildren and officiate the marriages of his children.

Don expects two or three of his classmates from 1942 to attend the upcoming reunion, and it won’t be the first time he’s seen them since school.

“We’ve kept up with them,” he said. “We’ve tried to have our own little class reunions.“

To help support Pacelli during his visit, Bill has painted a picture of St. Augustine Church. He made 100 prints, and plans to sell them as a fundraiser during the 100-year event.

Tom said returning to Austin and Pacelli brings back a lot of memories.

“We were there for the 75th anniversary,” Tom said. “There’s a great sense of enjoyment going back.”

When the Knauer brothers were younger, they met sporadically. But for the last five years, the siblings have reunited yearly in Nisswa, Minn.

Typically that happens in September or later in fall, but the brothers had reason to return to Austin earlier than that this time.

When the brothers get together, they like to recap the same stories and jokes, and talk about the state of their health. While Pacelli’s 100th anniversary celebration will be the feature of the brothers’ trip, their week-long get together also includes several nights in Eden Prairie and watching a production at the Chanhassen Dinner Theatre. They may squeeze in a trip to a casino or the Mall of America.

Pacelli won’t be the only stop on the Knauer brothers’ list when they return to Austin. They also plan to visit Knauer’s Meat Market, which the brothers’ grandfather, Anthony Knauer, bought in 1907. Their uncle, Joe Knauer, ran the market while they were growing up in town.

“Once in a while, if I’m down there, I will drop in,” said Don Knauer, the oldest of the five brothers.

After reports of gunshots near the Austin Public Library on Aug. 10, an Austin man has been charged with two... read more