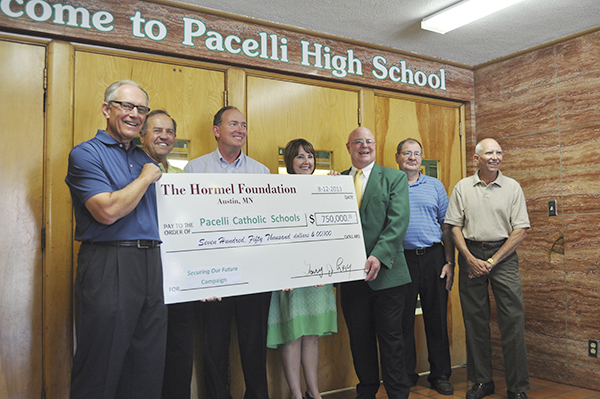 A Pacelli Catholic Schools effort more than three years in the making came to fruition Monday.

The school’s Securing Our Futures campaign has raised more than enough money in personal pledges to pull in the full $750,000 1-for-3 grant offered by The Hormel Foundation. Leaders in both groups gathered for a check presentation Monday morning at Pacelli High School.

Gary Ray, chair of The Hormel Foundation, was excited the Foundation could contribute to Pacelli.

“It really meets one of the three pillars of the foundation, which is education,” he said.

“For the next hundred years, we’re going to do you proud,” he told Hormel Foundation directors.

“It’s going to help us improve the facilities,” Hamburge said. “We really have to prepare the kids for the digital world.”

A portion of the funds will also be used for scholarships, so Catholic education in Austin does not cater specifically to the wealthy, he said.

“That money is just huge to help this school continue its legacy,” Hamburge said.

The Securing Our Future campaign began in May 2010 with the goal of raising $3.5 million for Pacelli Catholic Schools over the following three years. The Hormel Foundation pledged to match Pacelli’s fundraising 1-for-3, up to a $750,000 limit.

“We met as a board and decided there was nothing better than an incentive,” Ray said. “They’ve been very successful.”

Ray said the Hormel Foundation was originally founded as a means of supporting three pillars: science, community involvement and education.

“Today, we’re fulfilling one of those pillars,” he said.

In wake of fair, big plans for next year

People settle in for the 2013 Ribbon Auction Saturday morning at the Mower County Fair. The dust has hardly settled... read more