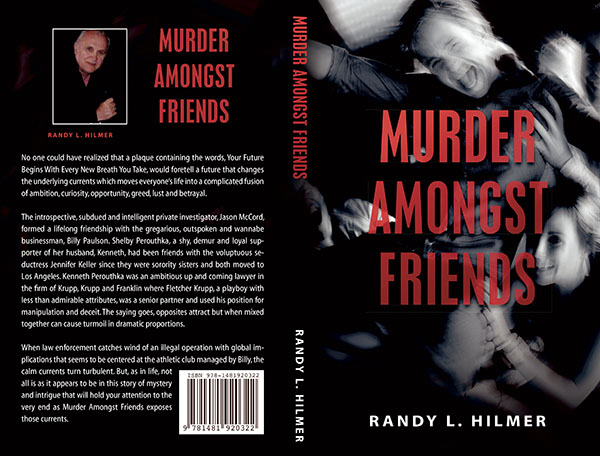 The book over of Randy Hilmer’s first book “Murder Amongst Friends.” Photo provided

For new author Randy Hilmer, getting reactions from his readers is the culmination of all his efforts.

“That really just makes the whole project worth it,” he said.

Randy Hilmer, an Austin native who now lives in Las Vegas, released his first book earlier this year. “Murder Amongst Friends,” a murder mystery, came out in March and is now available in paperback. The book was the groundbreaking for Hilmer’s writing career, and he’s now in the process of writing a sequel.

Hilmer graduated from Austin High School in 1966, where he was captain of the wrestling team. He attended Austin Community College for two years and graduated in 1968. After, it was off to Wayne State College in Nebraska, where he finished his studies and enlisted in the Navy. He served as crypto security officer for the Atlantic Fleet for 3 1/2 years.

Following his discharge, Hilmer took a job with a Hormel plant in Beloit, Wis. He later moved to Las Vegas and became the senior buyer for engineering with Boyd Gaming Corporation, which operates a number of casinos.

Creative expression was nothing new to Hilmer. He had been writing songs his whole life and combining them with instruments like keyboard and guitar. The songs were little slices of ideas, like “1-800-4-HEAVEN,” a song about being able to phone a deceased parent, sibling or friend to have one last conversation with them.

By Hilmer’s count, he has written about 80 songs. Eventually, an inkling came to write something longer and more involved.

“I’ll try to step it up a notch,” he said to himself. “I had this idea for a story, so I just started typing.”

He started writing in October 2012. After crafting the first few chapters, Hilmer passed his work around. The drafts drew interest from those around him, and he soon resolved to finish the book. He asked Wendy Malecha, a friend he had known for years, to serve as his editor. She worked with him via email.

But before he went any further, Hilmer did his homework. He researched the pitfalls that plague first-time writers, and what makes a debut book succeed.

“I read article after article,” he said.

Many points of advice shaped the way he would end up writing. When one article, for example, warned dialogue shouldn’t tell a story but supplement it, Hilmer looked at his first chapter more critically and reworked it.

The book came together quickly, with Hilmer writing a chapter every morning.

“I’d get up early in the morning and write,” he said. “That’s when I was most creative.”

When writing, Hilmer likes to end each chapter with a strong hook to keep the reader going. He also aims to put little clues in along the way that connect in a meaningful way to a later event.

“That’s something I really love doing,” he said. “Putting those hints in there that don’t stand out.”

Hilmer is 16 chapters into the sequel at this point, and estimates it could come out next spring. Between now and then, there’s more to write and several more laps of editing to do. With each one, he and Malecha focus on a different aspect of the writing. Likening it to painting a picture, Hilmer thinks of the writing as black and white contours, which serve as the foundation for revisions.

“Editing just kind of puts the color in it,” he said.

Malecha makes suggestions on parts she thinks should change. Then Hilmer weighs in. They hash out their thoughts on the matter until they find a word or phrase both can agree on.

“It was both challenging and enjoyable editing Randy’s book,” Malecha said. “I thought it turned out remarkably well, and he deserves much credit.”

Hilmer credits Ann Rule, a true crime author, as one of his main influences.

Her books include “The Stranger Beside Me,” a 1980 release detailing the case of serial killer Ted Bundy, who Rule knew personally from when the two worked at a Seattle crisis clinic. But while Rule’s writing is based on actual events, Hilmer prefers to keep his to fictional characters.

So far, becoming an author has not been a profitable pursuit for him.

He had to cover the costs of publishing, and word about the book is still getting out. But Hilmer said the project was well worth the effort.

“It was not done to make a lot of money,” he said. “It was done to fulfill my creative urges.”

Hilmer is nearing retirement at Boyd Gaming, and he looks forward to spending his upcoming free time playing golf, writing songs and poetry, and continuing to write stories.

He hopes to hear back from more of his readers on Amazon.com, where “Murder Amongst Friends” is available for purchase.

Plenty of variety at this year’s Festival

This is the continuation of a series of articles profiling some of the artists participating in this year’s Austin ArtWorks... read more