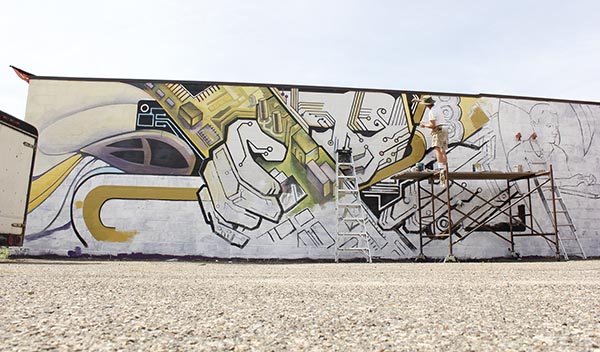 Greg Wimmer of Rochester paints a section of a mural on the back side of Simplified Technology Solutions Monday morning in Austin. The mural is funded by the Main Street Project. Matt Peterson/matt.peterson@austindailyherald.com

With splattered boots, shorts and shirt, a Rochester man is further transforming Austin’s Fourth Avenue into a work of art.

In just two weeks, Greg Wimmer has transformed a bare wall into a giant mural that blends the concept of business, technology, people and the future. Austin’s newest mural — on the backside of Simplified Technology Solutions — was approved for funding by the Main Street Project last Monday, a day when Wimmer again climbed up onto borrowed scaffolding and made noticeable progress with each brushstroke. From up close, the wall’s imperfections show through the fresh paint. But from across the street, as one walks out of the Austin Public Library the mural seemingly pops out and reaches into reality. 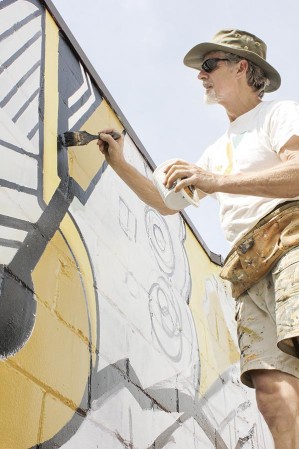 Greg Wimmer of Rochester paints a section of a mural on the back side of Simplified Technology Solutions Monday morning in Austin. The mural is funded by the Main Street Project.

“It’s a matter of doing something that reflects the business, but also something that stands on its own as a piece of artwork,” said Wimmer, a soft-spoken individual, shielded by hat and sunglasses.

Several weeks ago Justin Bickler, owner of Simplified Technology, spoke with Main Street Project Executive Director Sarah Douty about a mural, and Wimmer was suddenly back in the mix. He had painted a mural in downtown Austin several years ago and completed another at the Cedars of Austin’s lobby. He has painted numerous murals in Rochester, among other cities, such as in Marshall, Walnut Grove, and Huron and Rapid City, S.D. Now, his work is becoming a fixture in Austin.

Wimmer trained as a commercial artist and illustrator and worked for an ad agency in Rochester for many years, followed by many years on his own. He specializes in graphic design, but he never suspected his career would circle back to such a tranquil profession. In his early 20s, he painted a few murals for state parks, but that chapter ended quickly, despite his passion for the work.

“I thought, ‘This is nice, but I’ll probably never do this stuff again.’”

He was wrong, and today Wimmer has completed nearly 30 murals, from outer and inner walls to floors. He has more work awaiting in Rochester.

On Monday, Wimmer worked quietly, by himself, high on the scaffolding with a few buckets of paint and brushes. Inside his little, red hatchback, he stored a few more odds and ends, including the computer sketches he designed, both black and white and colored.

His murals take form quickly as he often works on his projects in the dark, when he can shine templates onto the wall with a projector and then trace the lines.

Wimmer had conversations with Bickler. After all, Bickler runs a business just on the other side of the wall. The mural needed to be fitting. However, Wimmer used the conversations to draw ideas and inspiration.

“I met with Justin about everything,” Wimmer said. “I always discuss things because it also gives me ideas.”

Because Simplified Technology is a computer solutions business, Wimmer took technology and blended it with life.

A major fixture of the mural features some sort of living machine, composed of computer switchboards, reaching into the city. 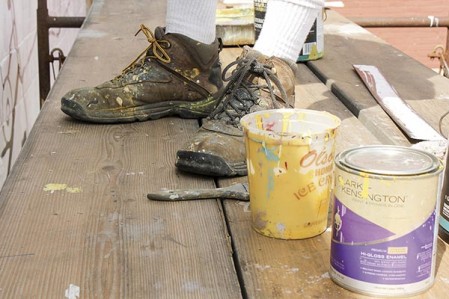 With splattered boots, Greg Wimmer stands on the scaffolding and makes progress on the newest mural in Austin

“It adds to the area,” Wimmer said. “It makes it come to life a lot more.”

Another scene simply shows a person working on a laptop computer. Wimmer understands the balance: A mural shouldn’t be too busy or too simplistic. For this mural, the location was a huge bonus. The wall is very exposed and adjacent to a parking lot that is seldom used.

“I think it fits in well,” Wimmer said. “With the library across the street, it’s got good viewing.”

Douty says the mural only adds to Fourth Avenue’s growing arts scene. Among the Paramount Theatre, Hormel Historic Home, library, artistic plans for the Austin Municipal Plant and the upcoming ArtWorks Festival, the mural is right at home for the future on “arts row.”

While the Main Street Project has funded large-scale to efforts to beautify downtown Austin, smaller funds are available for projects such as Wimmer’s. When Wimmer looks around Rochester, he notices how simple things such as images painted on electrical boxes can add a new feel to a city.

He wants to bring a little more of that to Austin — again.

Douty knows exactly what he means.

“Small things can make a difference,” she said.