A legacy up for bid 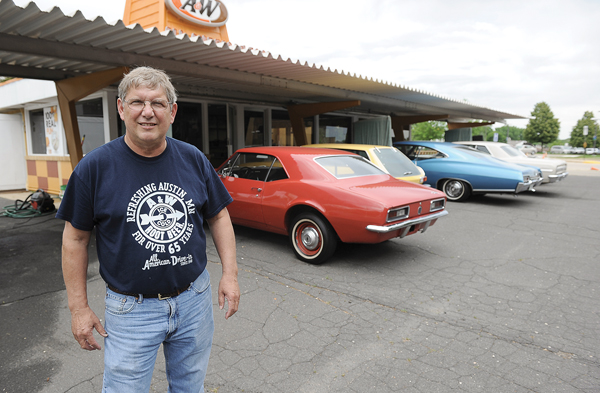 Gregg Johnson will give those interested in cars a chance at car history when the family auctions off more than 50 collectibles.

Family of Austin collector puts cars on the auction block

When it comes to personal legacies, Gregg “Bud” Johnson’s was twofold.

Many recognize the late Austinite as the man who brought about the local A&W, a long-standing fixture of the community before its recent closing. Around the same time as the doors to the burger shop opened, however, Bud began a second undertaking — collecting cars.

“My dad collected cars for a long time,” said his son, also named Gregg, who joined his father in the hobby. “I think one of his first cars was a 1929 Model A.”

More than 60 years later, Bud and Gregg’s prized possessions will go up to the highest bidders. The Bud “Rootbeer” Johnson Collection Auction at the Mower County Fairgrounds begins at 10 a.m. June 29, with a preview of the items available to be held from noon to 8 p.m. the day before. More than 50 cars from his and Gregg’s collection, along with scooters and other vehicles, will be up for bid, many of which have been used in parades and car shows.

“He drove some, and some he didn’t drive very much,” Gregg said, adding all of the vehicles still run. 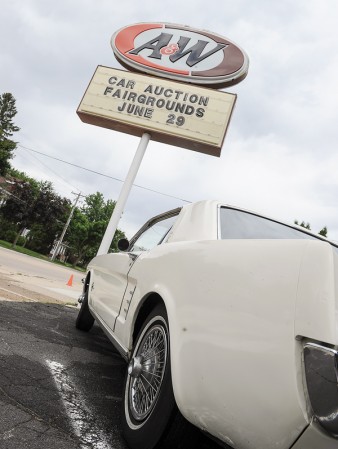 The A&W sign announces the upcoming car auction and hangs over 1966 Ford Mustang, one of the cars that will be auctioned off on June 29.

Bud was born in Austin in 1924 and grew up working on the family farm. He flew missions with the U.S. Air Force in the Pacific Theater during World War II, where he piloted B-17 and B-24 planes. In the community, Bud was part of the Lions, Elks, Legion and VFW. He passed away in December 2011.

Gregg joined his father as a car collector around 1970.

“I’ve always enjoyed cars,” he said. “That’s one reason the A&W was so fun.” Instead of having to go see cars, he added, the cars would come to see him at the drive-in restaurant.

A few friends have added cars to the auction, but the majority of the automobiles belonged to Gregg or his father. The Johnsons decided it was time to clear out the collection.

“It just gets to be too much work to keep them all up,” Gregg said. “A few cars you drive more than the other ones.”

That didn’t make it easy to choose which would stay and which would go. At one point or Gregg came up with reasons to keep each one, but had to whittle down his list to commit to just a few of them.

The keepers include an El Camino, which Gregg has always liked, and a ‘55 Corvette he has had since 1970, around the time he first started collecting.

While he intends to thin out his collection, Gregg said he’s no less interested in cars, and will likely still buy some in the future.

Those who aren’t able to make it to the fairgrounds later this month can still take part in the auction. VanDerBrink Auctions owner Yvette VanDerBrink, whose company specializes in collector cars and antique tractors, said the event was being advertised both locally and nationally, and bidders from around the world would be involved.

Interested collectors can register remotely and place their bids online during the event. Right now, VanDerBrink said there are more than 100 bidders already confirmed to take part in the event online. Others may still sign up all the way up until midnight on June 28.

“We’re getting calls from all over the United States and actually other countries, also,” VanDerBrink said.

According to VanDerBrink, the time is ripe for an auction like the Johnsons’.

“Last year we saw a huge increase in the market for collector vehicles,” she said.

Adding another vehicle to the collection isn’t the only reason VanDerBrink said bidders will vie for the collectable cars. Some view it as an investment, since certain models only gain value and become rarer. For others, it’s a more personal matter.

“They’re buying these to find old memories, reconnect with their childhood,” she said. “It’s really unique when you can buy a part of history.”

Of course, there’s yet another reason to bid on a collectible car.

“People are looking for something fun to drive,” VanDerBrink said.

Some of the auction’s highlights include Mustangs from ‘66 to ‘91, Volvo sports cars from the 60s and 70s and an ‘87 Corvette with very low mileage. There’s even a three-wheel Cushman with a customizable sidecar, which historically has been used for anything from a toolbox to an ice cream maker, Gregg said. Also included is a Model T Speedster racer with a paco body.

VanDerBrink summarized the inventory as “everything from a 1906 Cadillac to a 1987 Turbodiesel Mercedes.” 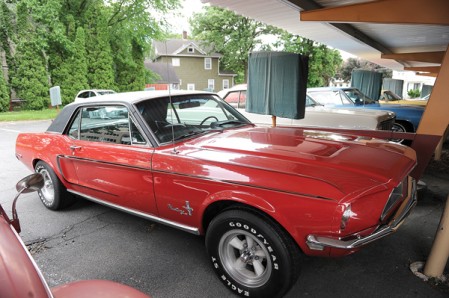 Another Mustang, this one a 1968, is another example of the cars that will be auctioned off.

While it’s difficult to forecast exactly how much the cars at the auction could fetch, VanDerBrink said some of them are valued above $50,000. The auction is a “no reserve” event, meaning none of the items will be held.

“Everything’s going to a new home,” she said.

With about two weeks left until the auction, Gregg is getting cars washed and ready to go. People slow down as they drive past to get a better look at some of the vehicles, and some stop to talk. Many tell Gregg they heard about the auction and are excited for it.

Check it out online:

For more info on the auction and to view the list of cars available, visit www.vanderbrinkauctions.com and look under “Upcoming Auctions” on the right side of the page.