Packers win a thriller to get to section finals 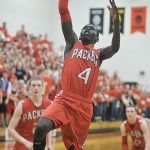 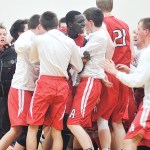 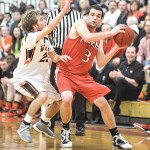 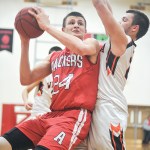 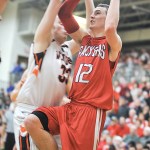 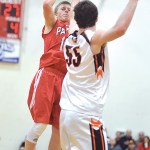 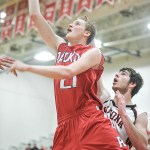 The Packers might want to take a deep breath.

Because they escaped by the skin of their teeth in the Section 1AAA boys basketball semifinals against Winona by a score of 51-49 in Packer Gym Friday.

Top-seeded Austin, which trailed by as many as 11 in the first half, was in a 49-49 tie when it forced a Winona jump ball to take possession. The Packers set up one final play with after a timeout with 14 seconds left.

The play looked to be a disaster as Austin point guard Zach Wessels lost his footing and the ball one step inside the halfcourt line. Winona had three players closing on the ball with the other two streaking down to the other end of the court in anticipation of a turnover. Instead, Wessels dove forward and tipped the ball past Winona’s defenders into the hands of Ajuda Nywesh, who drove for a lay-up with four seconds left.

“It just came to me and my first instinct was to take it to the basket,” said Nywesh, a junior who had nine points off the bench. “It was a great feeling.”

Wessels said he was expecting Winona to come at him hard on the last play.

“They only had four team fouls so they were gonna come at me pretty tough and try to knock it out of my hands,” Wessels said. “I just slipped, then I dove for it and Ajuda came up big and scored at the end. It was a crazy play.”

After Winona’s Chance Bechly missed a last second 3-point heave, the Packers’ celebration began. Austin head coach Kris Fadness said his team was lucky to get the win and it will now advance to the Section 1AAA title game, where it will play No. 3 Red Wing next Friday at Mayo Civic Center at 6 p.m.

“We were lucky tonight. We dodged a bullet. It seems to me that anytime you want to get anywhere in terms of a state tournament, you’ve got to have a game like this where you squeak by,” Fadness said. “I thought Wessels made an athletic, great play to keep us alive. He bailed us out with that play, because otherwise they’re going down and the game’s over.”

Austin (27-0 overall) led by as many as four in the second half, but Winona took a 49-46 lead with 1:59 left in the game. The Packers tied the game at 49-49 when Joe Aase sidestepped a defender and drilled a 3-pointer from the wing.

“I kind of had to spin back because he went for the ball,” said Aase, who finished with 22 points, while going 6-for-10 on threes. “I knew we were down three, I had an open look and I knew I had to take it. It’s probably the most nerves I’ve ever had, but you’ve got to fight through and we weren’t gonna let this be our last game.”

“Thankfully our DI kid bailed us out tonight,” Fadness said. “Joe’s a very confident basketball player. Joe could shoot a 360 turnaround from the three-point line and he’d believe it’s going in. Joe believes in his shot. I’m proud of him to step up and make the shots.”

Nywesh, who also had three assists, said he wanted to make sure Joe Aase and Tom Aase, who had four points, eight rebounds, four assists and five blocks, won their last games in Packer Gym.

“I wanted to win this one for (Joe and Tom),” Nywesh said. “I didn’t want their high school careers to end here and I want to play a few more games with them.”

Austin struggled out of the gates as it missed five of their first six shots and committed three turnovers as they trailed 9-3 with 14 minutes left in the half. The Winhawks (16-12 overall) surged to a 25-14 lead with 6:12 left when Daniel Schwartz converted a lay-up, but the Packers came back with a 14-2 run and they trailed by just two at the half.

“I always knew we were gonna come back, but we couldn’t dig ourselves in to big of a hole,” Joe Aase said. “We had a good start to the second half, we just couldn’t finish anything.”

The Packers will now look to the Section 1AAA title game, where they will play Red Wing (15-13 overall), which beat No. 2 seeded New Prague 73-66 in New Prague Saturday.

With the win, Austin still hasn’t lost a home boys basketball game since 2010.