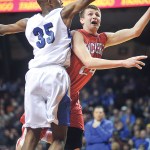 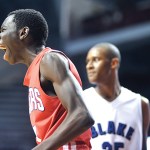 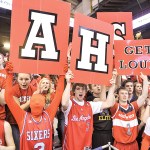 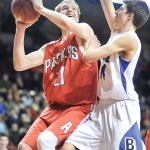 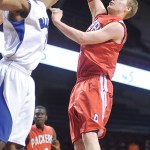 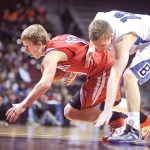 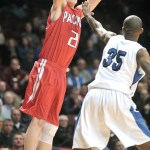 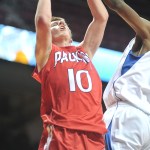 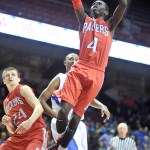 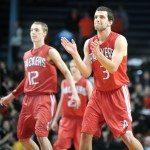 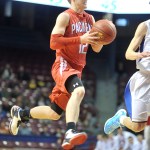 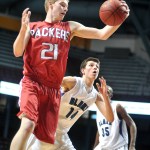 MINNEAPOLIS – The Packers did it again.

For the third straight game, the Austin boys basketball team turned an unfortunate situation into a season-saving win as they prevailed 59-56 against The Blake School in the Class ‘AAA’ state quarterfinals in Williams Arena Wednesday.

Austin, which trailed by 11 in the second half, took the lead for good when sixth man Ajuda Nywesh hit a pair of free throws to make it 54-52 with 2:38 left. Nywesh finished with 15 points on 4-of-6 shooting, 6 rebounds and five steals.

The Packers (29-0 overall) trailed 39-28 with with 14:06 left in the game, but they cranked up the defense and found ways to create offense.

“They did a nice job of spreading our zone out and for about 28 minutes they were the better team,” Austin head coach Kris Fadness said. “We panicked and went to some full court press and we got them to turn it over, they missed some free throws, our Division I kid hit some monster threes and our sixth man stepped up and had the game of a lifetime.”

Joe Aase caught fire for a stretch to get the Packers back in it. He hit four 3-pointers in a seven minute stretch to bring Austin to within 49-45 with 4:51 left.

“I really wanted [the ball],” said Aase, who finished with 20 points and eight rebounds. “I was struggling, but I thought I was taking decent shots. I had to keep shooting and my teammates were making plays. It was do or die.”

Nywesh hit a 3-pointer from the wing to make it 51-50 Bears and Tom Aase tied the game at 52-52 when he hit a pair of free throws after pulling down an offensive rebound and drew a foul with 2:35 left in the game.

Wessels, who had nine points, eight rebounds, three assists and four steals, sat for a few minutes after picking up his fourth foul on a charge.

“I was kind of upset with a couple calls, but it was over with,” Wessels said. “I was able to come back and hit that free throw.”

Fadness had a tough time taking Wessels out, but knew it was the right move.

“It was really hard and then the clock wouldn’t stop, but you’ve just got to understand that there’s more time left,” he said.

The Packers hit three 3-pointers in the first six minutes of the game as they jumped out to a 15-6 lead. Blake (22-8 overall) responded with a 9-0 run as it held the Packers scoreless for 10 minutes and the Bears used a 10-2 run to close the half as they led by seven at the break.

“We never quit and we never gave up,” Fadness said. “Everybody said maybe we should’ve lost (in the regular season) to know what it feels like but I don’t think this team knows how to lose right now.”

Austin will play Marshall, which beat Grand Rapids 69-52 Wednesday, in the Class ‘AAA’ semifinals Thursday at 2 p.m. Marshall is the 3 seed and is 28-2 overall.

Aase is just glad that he didn’t have to go back to Austin Wednesday.

Wessels, who drew a lot of attention from Blake, is looking to be the focal point of the offense again.

“I’m excited to get to the Target Center and it’s gonna be fun,” he said. “When they key on me, I try to get other guys involved and if it happens again, I’ll spread it out again.”

Look for a live play-by-play blog at austindailyherald.com of the semifinal game at 2 p.m. Thursday