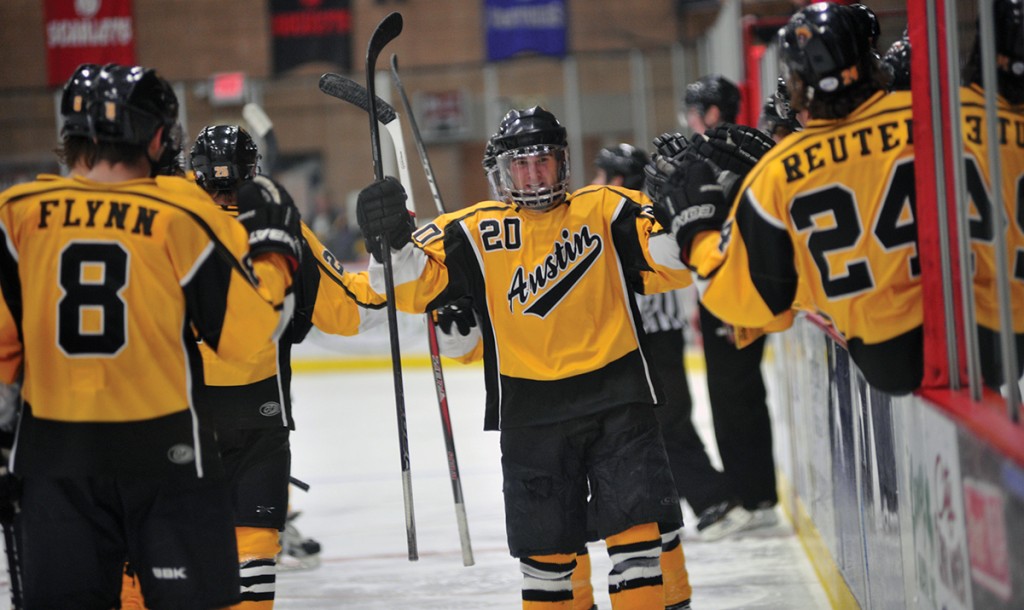 Austin's Brandon Wahlin is congratulated after scoring for the Austin Bruins in Riverside Arena Dec. 31. Wahlin finished with a hat trick and became the Bruins' all-time leading scorer in a 6-3 win over Coulee Region. -- Herald File Photo

Blood truly is thicker than water.

Austin Bruins forward Brandon Wahlin went with family when he made his college decision and now he’ll be headed to play Division I hockey at the University of Massachusetts next year and he’ll most likely be playing with his younger brother three years from now.

Wahlin recently committed to a 70 percent partial athletic scholarship at UMass and just four hours later, his younger brother Jake Wahlin, who has 56 points in 25 games as a sophomore at White Bear Lake High School, also signed with the Minutemen.

Brandon also drew interest from Bemidji State, University of Nebraska-Omaha and UMass-Lowell, where former Bruin Christian Folin has 11 points in 22 games as a freshman defenseman.

Folin tried to recruit Brandon, but the chance of playing with his younger brother was too much to pass up for the Bruins’ top scorer.

“Folin tried getting me to go to Lowell and I was definitely interested in playing with him again,” Brandon said. “But UMass offered to me and my brother and it’s kind of a unique situation that we couldn’t dream of. I couldn’t pass it up.”

Brandon is tied for the NAHL lead with 55 points (17 goals and 38 assists) and the Bruins (32-7-5 overall) have already clinched a playoff berth as they have most points in the NAHL (69).

Brandon is hoping to accomplish a few more things in Austin before heading to the East Coast.

“It’s a little weight off my shoulder,” he said. “I still want to get to the Robertson Cup and I still want to continue improving. I think I can step in and play right away (at UMass), but I don’t want to be a swing shift guy. I want to be a guy who’s in every night.”

UMass is currently 10-12-1 overall and it plays in the Hockey East Conference.

Brandon, who is 5-foot, 9-inches and 175 pounds is not worried about being too small to play at the next level.

“I’ve grown up being the small guy and it’s not like I’m not used to it,” he said. “I’m more excited than anything and it’s a smaller, quicker, faster conference. They have an Olympic sized hockey rink and that plays to my benefit.”

Brandon is the Bruins’ all-time leading scorer as he has 34 goals and 68 assists in 108 games.

The Bruins are on the road to play at Bismarck Friday and Saturday night. 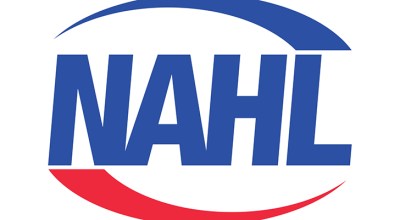 Bruins grab some help in the NAHL draft 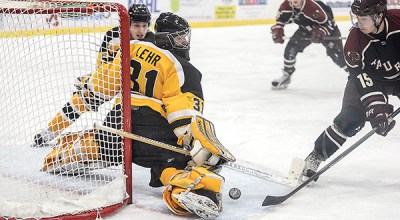 Wings eliminate Bruins with a sweep