Back to Back: Packer boys win Big Nine Conference 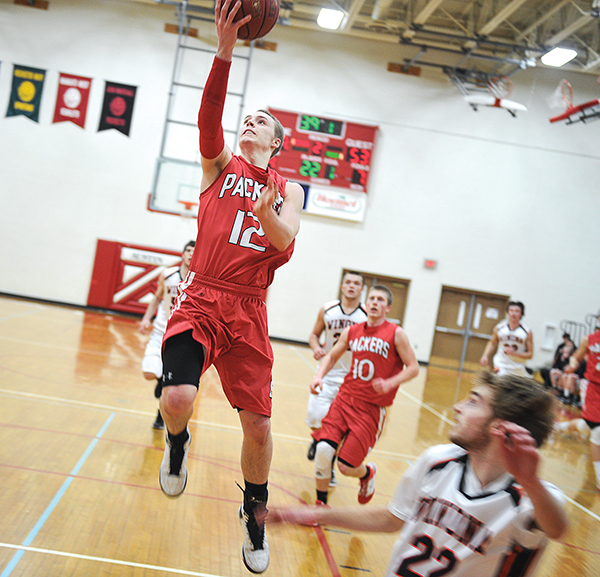 Austin’s Zach Wessels goes up for a late-game lay-up against Winona Tuesday night in Packer Gym. The layup put Wessels just one point away from 1,000 points.

The Packers found themselves in a dog fight and they made all of the big plays down the stretch to beat Winona 61-53 and win their second straight Big Nine boys basketball title in Packer Gym Tuesday. 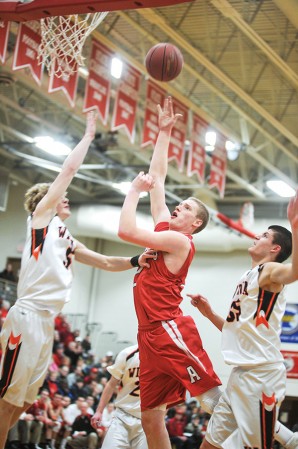 Austin’s Joe Aase goes inside against a crowd of Winona players for two in the first half Tuesday night in Packer Gym. With the win the Packers clinched the Big Nine for the second straight year outright.

The Winhawks (12-11 overall, 9-6 Big Nine), who had won six of seven coming into the game and had recently upset Rochester John Marshall, pulled to within one three times in the second half, but Austin had an answer every time.

Joe Aase, who scored 25 points and hit seven 3-pointers, knocked down three 3s in the last nine minutes when it was a one possession game.

“It was nice to be able to make those shots after kind of struggling,” Aase said. “It was a hard fought game. We had to give it every thing we had.”

Austin’s junior point guard Zach Wessels was key in the win as well. He converted a three-point play to make it 49-45 with 6:40 left and he put the Winhawks away for good when he converted a lay-up while drawing contact to make it 59-51 with under two minutes to go.

“We don’t want it to be close, but when it is I want to win,” said Wessels, who finished with 17 points, five rebounds, six assists and four steals. “I’m very competitive and that brings out the best in me.”

The No. 2 ranked Packers (23-0 overall, 16-0 Big Nine) led by as many as nine in the first half. Austin head coach Kris Fadness tried to send a message to his team by sitting four of the starters for a short stretch early in the second half.

“I was unhappy with our energy level and our communication,” Fadness said. “We just didn’t have a whole lot of pop to us tonight and I give credit to Winona. Their half court zone made us a little stationary and the game reminded me a lot of the New Prague section game last year.”

The Winhawks hit their fair share of 3-pointers, but they also were able to penetrate Austin’s zone at times to get some easy looks.

“We were slow on our rotations and I was in particular,” Aase said. “I don’t know what was wrong with me but I wasn’t getting in position. We’ll get back and work on it tomorrow.” 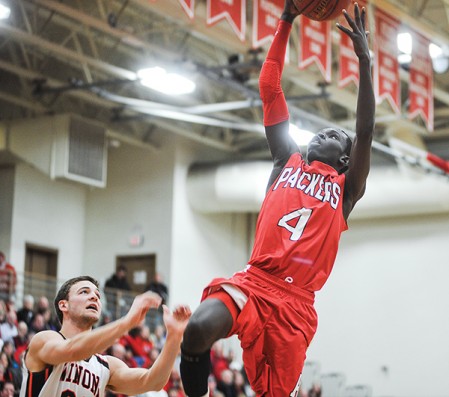 Austin’s Ajuda Nywesh gets a layup in the first half against Winona Tuesday night in Packer Gym.

With the Big Nine conference locked up, Austin still has road games against Rochester John Marshall this Friday and at Owatonna next week. The Packers will also host Caledonia Saturday at 7:30 p.m.

Fadness hopes his team will come to play down the stretch.

“Hopefully the fact that it’s JM and they’ve kind of been in our rear view will give us fire to get ready to practice and play them,” he said. “We’re getting everybody’s best shot and I’d like us to approach these last three games as tournament games.”