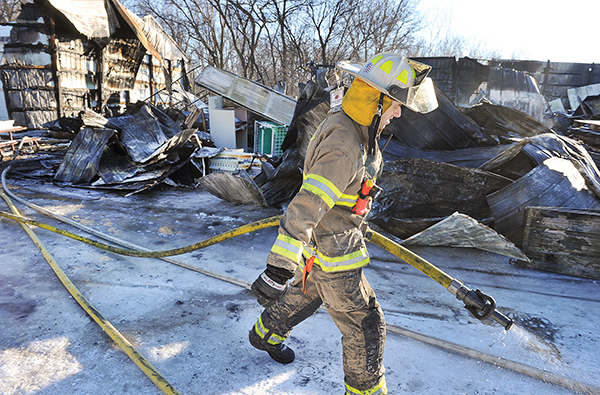 Austin fire chief Mickey Healey drags a hose away from the burned out wreckage of a shed on the Mark Raimann property just south of Austin early this morning. -- Eric Johnson/photodesk@austindailyherald.com

A rural Austin man’s shed and possibly more than 5,000 items were declared a total loss after a fire Friday morning. 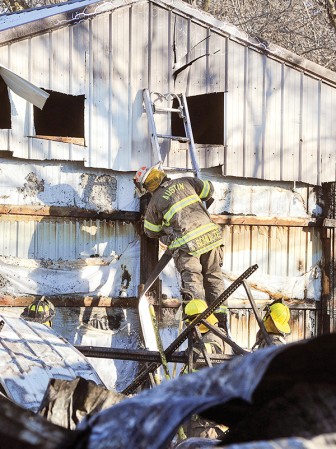 Firefighters check for remaining hotspots at a shed that burned early this morning.

Austin, Rose Creek and Lyle fire departments responded to a blaze at about 3:47 a.m. Friday at a home at the 54500 block of 175th Street, according to Mower County Sheriff Terese Amazi.

Amazi said the homeowner at that residence reported the fire after he woke up hearing a loud explosion. He reportedly looked out the window and saw a large ball of fire where his shed should be. The man last reported being inside the shed at 11 p.m. Thursday.

The homeowner runs an Ebay business where he sells antiques, collectibles and old toys, Amazi said. He used the 40-by-120 foot shed as an office and storage space, and he listed more than 5,000 items on Ebay.

Amazi said the cause of the fire and the estimated total property value lost is unknown, but the homeowner was insured. The man did have several heaters inside the shed, but it is unknown whether those items contributed to the fire. No injuries were reported.

The House has overwhelmingly approved $9.7 billion to pay flood insurance claims for the many home and business owners flooded... read more