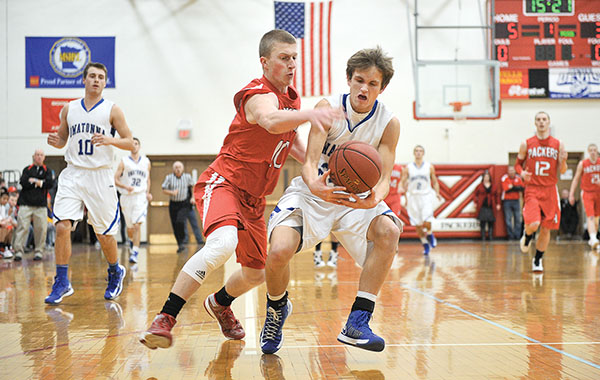 Austin's Bret Lukes reaches for the ball as Owatonna's Dexter Leer tries to gain control of it in the first half Friday night in Packer Gym. Eric Johnson/photodesk@austindailyherald.com

The Austin Packers stepped up the defensive pressure and never got cold on offense as they handled the Owatonna Huskies 67-46 in Packer Gym during Friday night’s boys basketball game.

The No. 2-ranked Packers (now 17-0 overall, 10-0 in Big Nine) pressed and trapped the Huskies ( 8-7) near half-court throughout the game and tallied 14 steals on the night compared to Owatonna’s four. 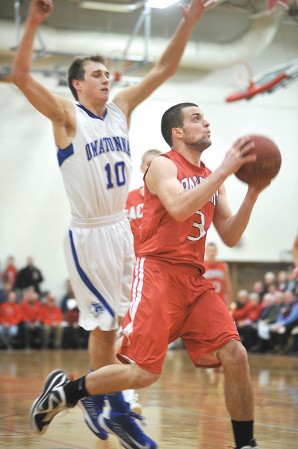 Austin's Collin Weisert cuts inside of Owatonna's Colton Schock on the way to the basket during the first half Friday night in Packer Gym. Eric Johnson/photodesk@austindailyherald.com

The Packers turned the ball over just 13 times, compared to the Huskies’ 23.

“We played with a lot of energy,” said Packer junior guard Zach Wessels, who tipped plenty of passes and was constantly on the ball.

“My teammates feed off of my energy,” he added. “I like to be pumped up.”

Many of those tips — also with the help of junior guard Bret Lukes, who had five steals — turned into transition points.

Austin started to pull away early as Owatonna couldn’t move the ball anywhere near the paint. The first half ended 29-12 with Owatonna hitting on just 3-of-20 shots.

“We’re a pretty good defensive team, and I thought we were really active in the first half,” said Austin head coach Kris Fadness. “The first half, that was the game.”

The Packers came out hot in the second half and went on a 12-0 run.

Midway through the second half, the Huskies heated up, especially from deep. They finished with nine three-pointers on the game.

With 8:30 left in the second half, Austin and Owatonna went back and forth as each made two 3s within two minutes. However, Austin never cooled off and at one point led 52-24.

Junior guard Ajuda Nywesh came off the bench and scored 11 points and helped maintain a big lead with two 3s in the second half. 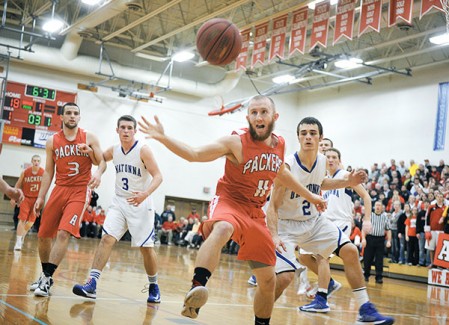 Austin's Tommy Olmsted watches the ball go out of bounds during the first half against Owatona Friday night in Packer Gym. Eric Johnson/photodesk@austindailyherald.com

“Ajuda Nywesh really shot the ball well in the second half,” Fadness said.

The Packers will travel to Rochester to take on the Mayo Spartans for their next game 7:30 p.m. next Friday.