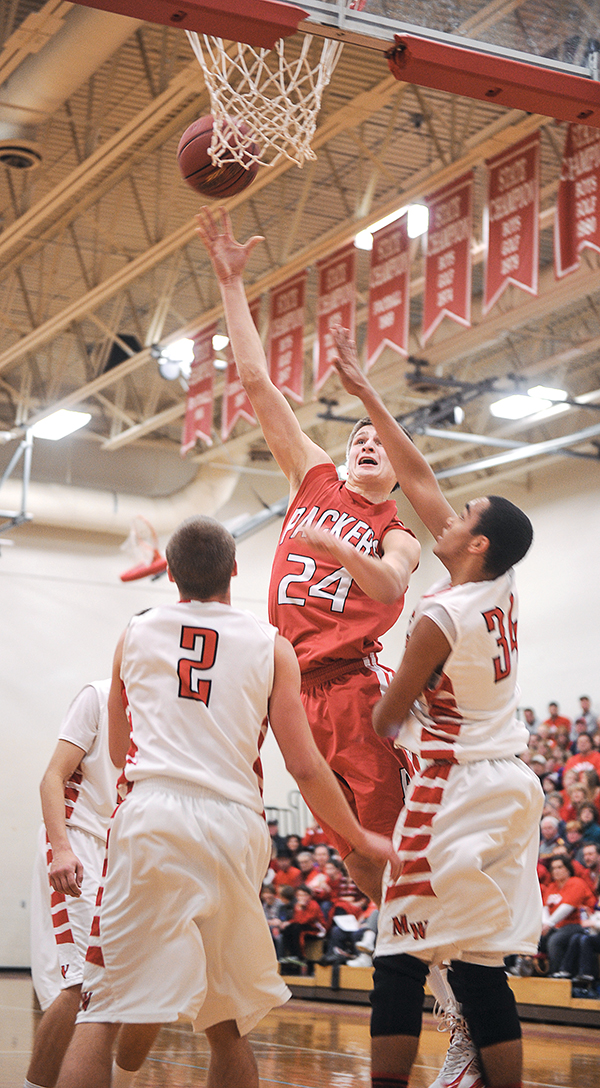 The Packers didn’t bring their ‘A’ game, but it was still enough to get by Mankato West in a boys basketball game in Packer Gym Friday.

No. 2 ranked Austin had a season-low point total as it shot just 38 percent from the field, 6 percent on three-pointers and committed 17 turnovers, but it held on to beat the Scarlets 56-45. 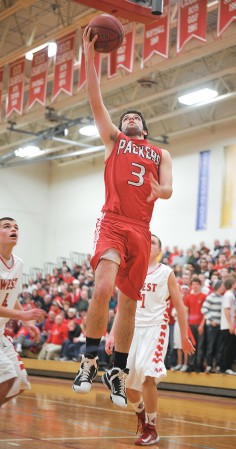 Austin's Collin Weisert drives for a lay-up during the first half Friday night in Packer Gym against Mankato West.

“I thought we were really bad tonight. We didn’t get any transition game going, we didn’t have rhythm and it was stagnant on offense,” Austin head coach Kris Fadness said. “We had some guys not play well tonight. That happens, but you can’t have that many play that poorly on a given night. We worked hard enough to win, but we’ve got to hold ourselves to a higher standard.”

On defense, the Packers got a boost from their senior big man Tom Aase, who also had a pretty big impact on the offensive end of the floor. Aase, who finished with 17 points, nine rebounds, eight blocks, five assists and three steals, hit a key drop hook shot to put Austin up 48-34 with six minutes left and he blocked several shots down the stretch.

“It was nice to get going a little bit on the boards. I was getting some cut-backs in the lane and I was able to score inside,” Aase said.

While he was glad to win, Aase wasn’t too pleased with how the night went for his team.

“We weren’t very happy with our performance tonight,” he said. “We didn’t move the ball very well and we didn’t do much on offense. I think it was our mentality going into the game and it was all on us.”

The Packer defense forced 27 turnovers, and Austin junior point guard Zach Wessels took advantage on some of those miscues to create some open court offense.

While the half court offense struggled, Wessels, who finished with 20 points on 7-of-10 shooting, was aggressive to the rim. 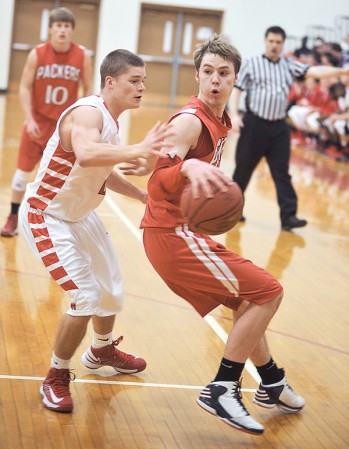 “I was just trying to help win this game for our team. Sometimes I take it and sometimes I’m setting people up,” he said. “Tonight I got into the defense and made some shots.”

Wessels said Aase’s presence on defense was a big boost for the Packers.

“He was a man tonight,” Wessels said. “He made blocks, boards and everything. Those blocks are always a momentum builder and that was good for us.”

West scored the first four points of the game, but Austin responded with a 14-0 run. The Scarlets never got closer than nine in the second half.