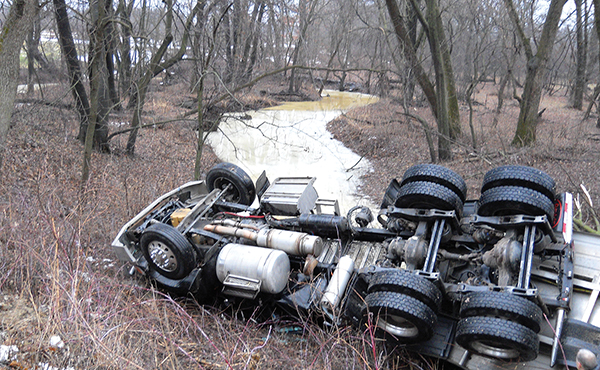 Milk from an overturned tanker drains into a nearby creek Tuesday morning. Photo provided

A milk truck that overturned near Elkton Tuesday spilled 6,000 gallons of milk into Schwerin Creek, according to the sheriff’s report.

The truck, driven by Jeremy Drees of rural Elkton, overturned on an icy road at about 3 a.m. near 21755 650th Ave., just south of Interstate 90. The road was covered in 1 inch of ice, said Mower County Sheriff Terese Amazi. Drees went to the hospital in Austin for evaluation before returning to the scene, according to the report. He is OK.

Deputies responded to the accident shortly after 6 a.m., and environmental specialists with the Minnesota Department of Natural Resources and Pollution Control Agency arrived as well. However, because of the time lapse, the river was contaminated with milk. MPCA officials were unable to contain the milk, which became trapped under the ice for about a three-mile stretch, they said.

Were the temperature any warmer, the milk could have caused problems in the creek, according to the MPCA. If the milk were allowed to decompose, it would rob the water of dissolved oxygen and result in fish and vertebrate die-offs. Thus far, there have not been negative effects, however.

An employee from Midtown Towing in Austin said the mess looked like “a giant milkshake.” The entire contents of the tanker, he added, emptied into the creek.

The tractor and tanker, owned by Mayer Milk Hauling, is a total loss, Amazi said. The report did not list the value of the vehicle.