Lehr steps up in shootout win for Bruins 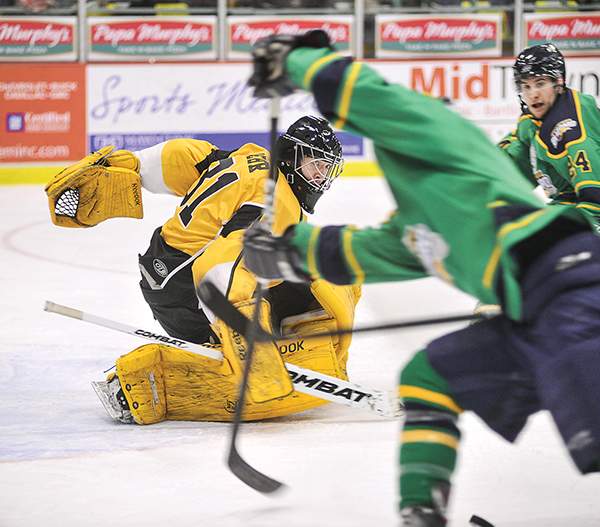 Austin goalie Nicholas Lehr zeroes back in on the puck after deflecting a shot in the first period against Brookings Saturday night at Riverside Arena. -- Eric Johnson/photodesk@austindailyherald.com

Just when it looked like the Austin Bruins were about to break down and lose their fourth straight game, their top scorer and their top goalie stepped up as Austin beat Brookings 3-2 in a shootout in Riverside Arena Saturday.

Brandon Wahlin, who leads Austin and is tied for third in the NAHL with 36 points in 26 games, scored the go-ahead goal in the shootout and Nick Lehr stopped four of the five shots he saw in the shootout to score the win. 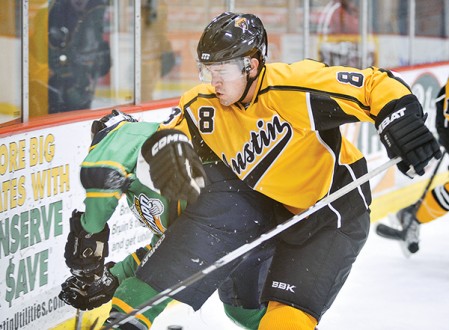 The Bruins Jake Flynn applies pressure against the boards against Brookings in the first period Saturday night at Riverside Arena.

Lehr looked to be headed towards a shutout headed into the final stretch of regulation, but the Blizzard (14-10-1 overall) scored two goals in the last two minutes, including a shot by Evan Hesse that sailed over a fallen Lehr’s head with just two seconds left in regulation.

Once the shootout started, Lehr was able to get himself focused.

“I just really wanted to win,” said Lehr, who had 23 saves. “It’s rough to get scored on in the last two minutes, but it was an exciting game. When it comes down to you in a shootout, it’s a lot of pressure. But you know if you win it’ll be a lot of fun after the game.

The Blizzard scored their final goal with a 6-on-4 advantage as they were on a powerplay and pulled their goalie. Lehr ended up on the ice when a pile of his teammates were driven into him by Brookings’ front line.

“I don’t know if we can really say anyone screwed up, they just had more guys out there, they worked hard and they scored a couple of goals,” Austin head coach Chris Tok said. “Nick made some great saves and he kept a lot of pucks to where they didn’t have a chance to get any momentum. He kept the puck and he didn’t give them any rebounds.”

Wahlin was able to score his shootout goal by using a move he goes to quite often in team workouts.

“I have a couple of moves that I like to go to,” he said. “The one that I did always works for me in shootouts in practice and before games. I saw the goalie was sucking back into the net and it worked out for me.” 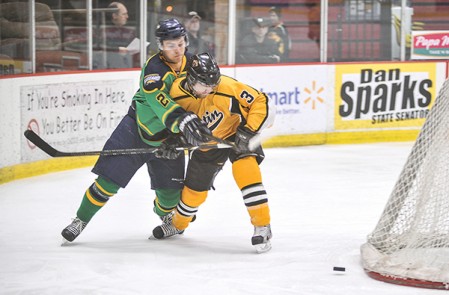 Joey Caprio fends off Brookings' Conor Andrle while chasing down the puck in the first period Saturday night at Riverside Arena.

Drew Anderson scored the other goal in the shootout for Austin (18-5-3 overall). In regulation, the Bruins got on the board with 1:29 left in the second period when Jay Dickman slapped in a one-timer for a powerplay goal and Austin went up 2-0 when Chris Fischer scored with 7:29 left in the game.

Lehr, who is from Roseville, Minn., is now 13-5-3 with a 91.1 save percentage on the season. Wahlin, who is from White Bear Lake, Minn. played against Lehr in high school and he said the Bruins had plenty of confidence in their goalie when the shootout began.

“When he has the kind of game (he had tonight) he’s unstoppable and we have all the faith in the world in him,” Wahlin said.