Hormel Foods Corp. claimed record profits and total sales in 2012, thanks in large part to its Don Miguel brand of Mexican food. 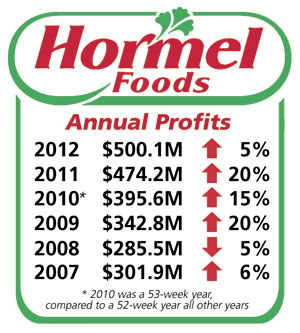 Hormel recorded an increase in profit in four of its five divisions for the year, although its refrigerated foods division profit was down 22 percent from 2011. The company cited spiking grain prices and lower pork costs as the reason for the decline.

The Jennie-O turkey division saw a profit increase of 16 percent for 2012 compared to last year, the specialty foods division was up 8 percent, and the “all other” division, which includes mostly Hormel Foods International, shot up 38 percent.

This is the fourth-straight year Hormel has had an increase in profits, going from $285.5 million in 2008 to $500.1 million in 2012. Total sales also topped $8 billion for the first time in company history, which is a substantial jump from $6.2 billion four years ago.

Continued strong sales of Spam and Jennie-O products helped Hormel as its net income climbed 13 percent in its fourth fiscal quarter. But both its earnings and revenue were below Wall Street expectations and its shares slipped 29 cents to $31.01 in premarket trading.

Analysts expected slightly higher earnings of 50 cents per share, according to a FactSet poll.

Revenue rose 3 percent to $2.17 billion for the quarter from $2.1 billion. Wall Street forecast $2.23 billion in revenue.

The Jennie-O unit, which makes up 20 percent of the company’s revenue, reported a 5 percent sales increase for the quarter thanks to better sales of its fresh tray pack products, turkey bacon and turkey burgers. Sales for the grocery products unit climbed 21 percent due to strong Spam sales, sales of Hormel chili and Don Miguel products. That segment comprises 16 percent of total sales.

“We continue to enjoy sales and volume growth in many of our value-added franchises, demonstrating that our growth strategies are working,” said Hormel CEO and President Jeff Ettinger in a press release.

The bulk of Hormel’s sales, 49 percent, come from the refrigerated foods segment. Its sales fell 3 percent on lower meat prices.

Specialty foods, which is 11 percent of Hormel’s revenue, reported an 8 percent increase, and the international unit, which comprises 4 percent of total sales, increased by 24 percent.