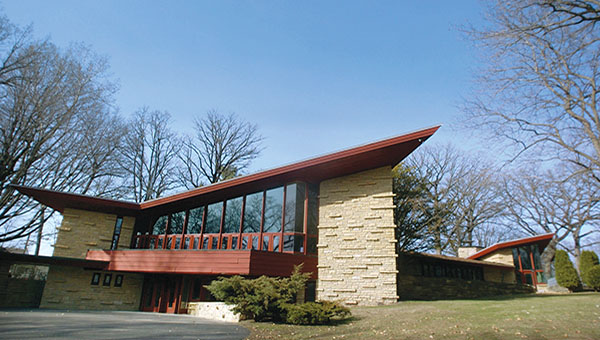 Peter Plunkett of Austin may open a bed and breakfast in his Frank Lloyd Wright designed home in Austin. — Herald file photo.

Those looking to stay at a historic home in Austin may soon have that chance.

Peter Plunkett, owner of a the S. Pearl Elam house designed by Frank Lloyd Wright, wants to turn that home into a small bed and breakfast. Plunkett, a partner at the Austin law firm Plunkett and Associates, Inc., will ask the Austin Planning Commission at its meeting tonight for a conditional use permit for his home at 309 21st St. SW, one block off of Oakland Avenue W.

The home, built in 1952, according to Plunkett, has been in his family since 1989. He said people have stopped by his house through the years to take pictures, and some have asked to see the inside, so he sees this as a way to promote tourism in Austin.

“The Elam home is the object of much curiosity and interest by the public as evidenced by many who drive by slowly to take a look,” Plunkett wrote in a letter to the Planning Commission.

He said he will still live there, but the back half of the home will be divided and accommodate one or two couples.

He said he will keep it low-key, with no parties or special events, he won’t sell food or liquor, and won’t have signs that will intrude on neighbors. He said couples can cook their own breakfasts in a kitchenette, and he will promote other Austin tourist attractions.

“It’s a low-key type of thing, but it’s really a great deal for Austin to have a famous architect on display,” he said.

Plunkett’s neighbors, Steve and Dorothy Krob, told the Planning Commission in a letter that they “wholeheartedly endorse” Plunkett’s endeavor.

Plunkett has had some problems with his law practice in the past, but he is moving on.

Minnesota Surety and Trust Company — which Plunkett is the president of — was fined $1.2 million in May 2011 by the Colorado Division of Insurance for its bail bond practices in Colorado, but that fine was stayed under a number of conditions, according to Plunkett’s lawyer, Marshall H. Tanick of Hellmuth & Johnson, PLC.

A group also filed a petition in Minnesota Supreme Court to suspend Plunkett’s license to practice law. Plunkett practices law under the Austin business Plunkett and Associates, Inc., along with his father, Warren Plunkett, who has practiced law there for over 30 years. Warren Plunkett will continue to operate Plunkett and Associates regardless of whether or not Peter Plunkett’s license is suspended.

This article has been updated. It originally incorrectly stated Peter Plunkett was fined $1.2 million in May 2011 by the Colorado Division of Insurance for bail bond practices at his Surety and Trust Company in Colorado.

However, it was Minnesota Surety and Trust Company — which Plunkett was the president of — that was fined $1.2 million. According to Plunkett’s lawyer, Marshall H. Tanick of Hellmuth & Johnson, PLC, the $1.2 million fine was stayed under a number of conditions.

The Herald regrets the errors and apologizes to its readers and to Peter Plunkett.

I want to voice my concerns about the notion of burning down the grandstand at the Fairgrounds. The City of... read more