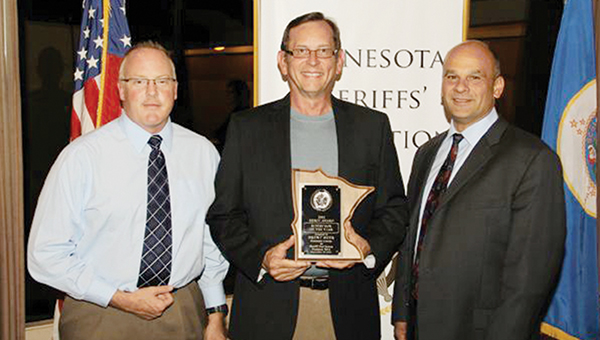 An Austin native has been recognized as a top professional in his field.

Brent Sizer, formerly of Austin, was presented with the Minnesota Sheriff’s Association Jail Supervisor of the Year Award for 2012.

Sizer is currently a detention lieutenant for the Hennepin County Sheriff’s office in Minneapolis, where the county jail has an average daily population of 750 adult pre-trial detainees. The Supervisor of the Year Award is a crowning achievement to a public service career spanning 28 years and counting.

The nomination letter from his superiors was impossible to ignore.

“Lieutenant Sizer is deserving of the ‘Supervisor of the Year’ award for several reasons above and beyond the criteria required for consideration,” it began.

“Professionalism, and leadership … Very positive attitude and professional management style, which creates an enriched working condition for employees to achieve their potential … Gives direction and promotes action to those around him,” it continued.

It’s a nomination that will be remembered for many reasons.

“Lieutenant Sizer gives more than you anticipate, manages his time and work habits wisely, takes on extra assignments, surpasses expectations whenever possible, can be counted on to do what he says and delivers on promises made, takes it upon himself to become an expert in his field, strives to perform to the best of his ability, strives to keep his knowledge up to date, supports those he works with, is sincere, honest and fair, and shares and provides knowledge to his co-workers,” his superiors said on Sizer’s behalf.

Sizer said that the award was “completely unexpected.”

“One thing I must mention,” Sizer said, “is that much of my success comes from the outstanding education I received from the outstanding teachers at Pacelli High School, not to mention the loving, nurturing guidance of my mother, and one of Austin’s leading citizens, Joyce K. Sizer.”

He has one brother, Steve, who retired as a Minneapolis police lieutenant after a nearly 40-year career.

His mother Joyce, who still resides in Austin, worked in several positions of community service before retiring.

The Jail Supervisor of the Year award-recipient is responsible for administrative tasks and many duties, including supervision of security and support staff, overseeing and managing payroll, handling personnel/human resource issues, discipline tracking, lawsuits and complaints, data collection, monthly and annual reports, risk management and many other specialized administrative tasks.

That’s a job description for more than one person, but Sizer accepts it.

Even taxpayers can appreciate the Austin native’s efforts in times of economic challenges. He is credited with “always looking for ways to cut costs for the sheriff’s office,” his superiors noted.

While Sizer is at the top of his game, that doesn’t mean he doesn’t remember where and when his roots were planted.

“My mother, of course, was the biggest influence, raising my brother, and I as a single parent,” he said. “But growing up in Austin also set me on the right path.”

“I’ve never forgotten that,” he added.

What does his mother think of the attention her son is receiving?

“I’m proud and excited,” she said.

Light the Night suicide benefit to debut in Austin