Aase is pleased with Davidson 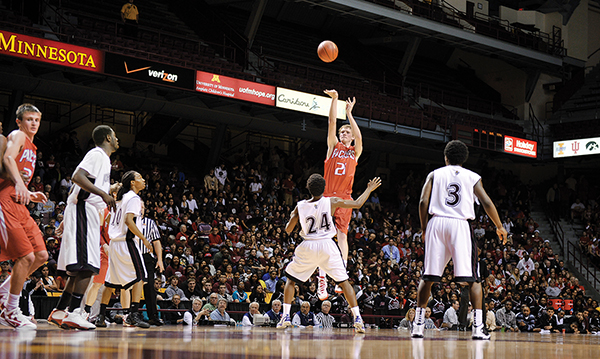 After multiple summers flying all over the country to AAU tournaments and two strong seasons with the Austin boys basketball team, Joe Aase can finally take a deep breath.

That’s because Aase, a senior, finally knows where he’ll be playing college basketball. Aase has made his verbal commitment to play at Division I Davidson College in North Carolina next season and he can now focus on the upcoming season for the Austin Packers.

“It’s a load off my mind and now I don’t have to deal with coaches calling. It’s nice for a while, but you do get kind of sick of it,” Aase said. “I like the feel of the campus and it’s beautiful. The town is kind of like Austin.”

Aase, who had a total of 11 Division I offers, recently made visits to Boston University and Davidson and he also considered staying close to home by taking Winona State or Minnesota state up on their Division II offers.

“I thought about it, but Davidson was just too good to pass up,” Aase said of WSU and MSU. “(Davidson) is really good academically and obviously their team’s been good. Hopefully I can play right away.”

From what Aase has heard from the Davidson coaching staff, he may be asked to step up as a freshman and it’s unlikely that he’ll be red-shirted.

After this season, the Wildcats will graduate Jake Cohen, a 6-10 big man who averaged 14.3 points and 6.1 rebounds per game last season and Aase was told that he may have to take over Cohen’s role.

“They want me to try and fill his spot,” Aase said. “It’s a lot of pressure and it’ll be something to work hard to get, but it’s nice to have something to shoot for.”

One of the positives for Davidson is that their head coach Bob McKillop has been there for 23 years. Aase likes that consistency and he also likes that McKillop has some connections in Europe, so playing pro ball in Europe could be a possibility for Aase after his college career.

“He’s not going anywhere and it’s nice to know he won’t be taking another job and leaving,” Aase said.

Austin head boys basketball coach Kris Fadness has seen Aase grow physically and athletically over the past few years. He said Aase is ready to be an impact player at the Division I level and he’s glad to have a Packer moving on to play at the highest college level.

“This is tremendous for our program to see that a kid can come through the system and accomplish a dream come true,” Fadness said. “However, Joe first and foremost with his commitment to getting better and working on his game and his family’s commitment to help him chase his dreams has been the main reason he is in this spot. We are all ecstatic for Joe.”

Aase, who is 6-8, led the Packers with 15.4 points per game last season and he added 6.7 rebounds and 1.6 blocks per contest, while hitting on 42 percent of his three-pointers and 47 percent of his field goals. He was part of an Austin team that made it to the state basketball tournament for the first time in 30 years.

Aase is hoping for another strong year this season to cap off his Packer career.

“I can’t wait to get started. It seems like it’s taken forever to get here and now it’s right around the corner,” he said.

Aase can officially sign his letter-of-intent with Davidson Nov. 15.