A ‘Walk’ to remember 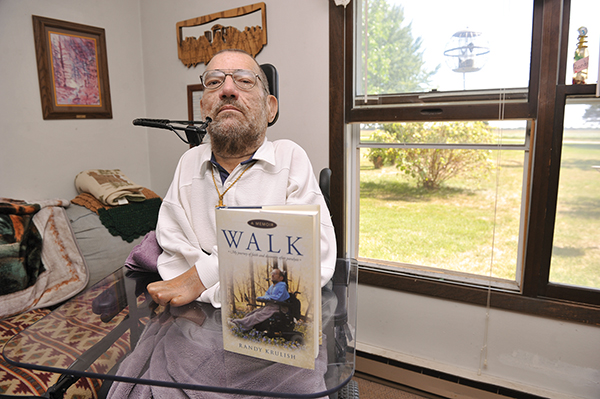 Having lived 46 years as a quadriplegic, Randy Krulish has released an autobiography, “Walk.” The book follows Krulish through his trials of those years, but more than that it is a testament to the strength of his faith and family. Eric Johnson/photodesk@austindailyherald.com

During wee hours of many mornings for the past year, Randy Krulish pecked away at his keyboard and created what eventually became a book.

Others before him have likely done the same thing and wrote their own books at moments when their deepest thoughts spontaneously occured. Yet Krulish wrote his book one peck at a time, literally, with the aid of a mouthstick and a keyboard in a fixed position. The 58-year-old from Lyle has spent 46 years as a quadriplegic. Just several weeks ago, he released his story: “Walk.”

“Throughout the years, people have said to me, ‘Randy, you should write a book,’” Krulish said. 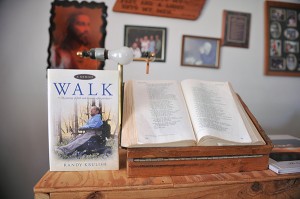 A copy of “Walk,” stands next to Randy Krulish’s Bible in his Lyle apartment. Eric Johnson/photodesk@austindailyherald.com

But Krulish never wanted to write a book, even with encouragement. For years, he never wrote about the day that changed his life and many lives around him: May 30, 1966. Krulish, 12 at the time, ran to the end of the dock, jumped as high as he could and dove. As he describes in his book, those were the last steps he ever took. He broke his neck at the C3 and C4 vertebrae. Forty-six years later, Krulish’s book details the events of his life. But more than anything, it details the strength of his faith and family. It may offer some hope to others.

However, it took the continuous persuasion of a friend and co-worker to actually start the year-long writing project. While volunteering at Lyle Elementary School in the 1980s, Krulish met Julie Bigaouette, a special education teacher. Still, that was decades before any talk of a book.

“I would see this guy sitting in the dark hallways of Lyle … and I asked somebody some day, ‘Why does that guy sit in the hallway every day?’” Bigaouette said.

Krulish soon began working in Bigaouette’s classroom and later teaching computers. Not until last year, however, did Bigaouette and Krulish start thinking about the book. Bigaouette convinced Krulish to write thoughts and compile them, so Krulish gave in. He had always kept to himself, but he started typing his life’s moments on his keyboard.

Over the years, Kruslish has tried the voice-recognition software. Yet he prefers his own method, which he has perfected over the years and now types about 20 to 25 words per minute, he suspects. Soon after he began, he sent his first bits and pieces of the book to Bigaouette.

“It was so touching and so moving,” Bigaouette said about the first glimpses she read about Krulish’s life “I called him back and said, ‘Oh my gosh Randy, there have got to be so many people in the world whose lives are filled with darkness and despair who could benefit from this.’”

Krulish continued to write his thoughts: memories of summer vacations, 4-H softball, the farm, family, the accident and uneasy days lying in the hospital.

“I typed away with my mouth stick, one letter at a time,” Krulish said.

Bigaouette said Krulish started churning out chapters, and Krulish said he didn’t focus on fixing mistakes or sticking to any sort of editorial plan. He just wrote, usually at dawn or earlier while he lay in his bed.

“I would come home almost every single night, and he would have another chapter waiting,” Bigaouette said.

An editor eventually entered the mix and helped finalize the book, of which WestBow Press agreed to publish and guide Krulish through the process. However, Bigaouette was the first to push for more details and more emotion — something of which Krulish was not comfortable revealing. When he did recall events, however, it stirred his own emotions again.

“I think that was probably the hardest for him,” Bigaouette said. “And then he would say, ‘I’m absolutely not going to write tomorrow because I have nothing left.’”

Even Krulish admits that Bigaouette’s persuasiveness helped him remember things he had chose not to remember for a long time. In many ways, it was a good thing.

“I didn’t remember how much I had been through,” he said. 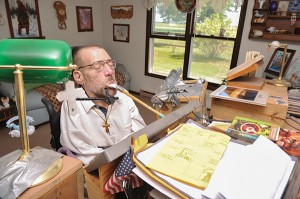 Randy Krulish demonstrates the process uses to type on his computer in his Lyle apartment. Eric Johnson/photodesk@austindailyherald.com

The trials Krulish has endured will shine through to readers; however, Krulish won’t show that on his face or through a conversation. Furthermore, the book isn’t about the sorrow. Krulish doesn’t have remorse about his accident. Every day, and in the book, Krulish credits God for the smallest of graces. He said God helped him and Bigaouette collaborate on the book, so perhaps other people can gain some inspiration from it. Now Krulish has seen a few reviews and received a few letters about how his book has had a positive effect. Though Krulish has read the book enough times to be sick of it, he is now satisfied that he followed through on the whole process and hopes his words will offer some solace to others.

“If they can get some hope out of this book even in those darkest times of life, then I think I’ve accomplished what I was supposed to do,” he said.

Randy Krulish will sign books and have books available for purchase on these dates:

“Originally the doctors had told my parents I wouldn’t live through the first night, but I did. Then, they said I wouldn’t survive the next few days, but I did. Next, they said I’d be bedridden, but I’m not. Finally, they gave me a life expectancy of fifteen years—forty-five years ago.” —Excerpt from “Walk” by Randy Krulish

“Over they years, many people have said, ‘Bet you wished you hadn’t gone swimming that day.’ I never thought that way. And I never regretted making that dive.” —Excerpt from “Walk” by Randy Krulish

Get ready for big holiday season

As summer winds down, the Austin Area Commission for the Arts is gearing up for its 2012 Fall/Holiday Season. The... read more