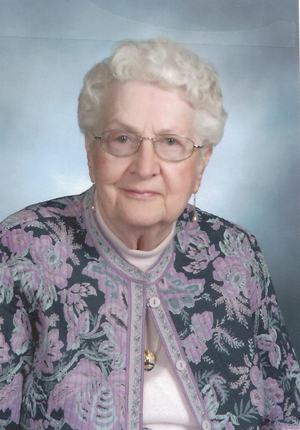 Stan and Meme started Ankeny Dairy Foods in 1946. Meme helped by wrapping butter and packaging cottage cheese. They enjoyed many fishing trips to Canada and spending winters in Mesa, Ariz. Stan and Meme were married for 56 years before Stan’s death in 1995.

Meme lived at the Cedars where she led Bible studies and played in the kitchen band. Later, she lived at Primrose where she enjoyed leading Bible studies. Meme resided at St. Mark’s for the last three years.

She was preceded in death by her parents, husband Stan, six sisters and two brothers.

Funeral services will be held at 10:30 a.m. Tuesday, July 3 at Bethlehem Free Methodist Church with the Rev. David Martin officiating. Interment will be at Grandview Cemetery. Visitation will be at Clasen-Jordan Mortuary from 5 to 7 p.m. Monday, July 2 and at the church on Tuesday for one hour before the service.

Take one part Einstein, one part Picasso and one part Steve Martin-style antics, and what do you have? Summerset Theatre’s... read more