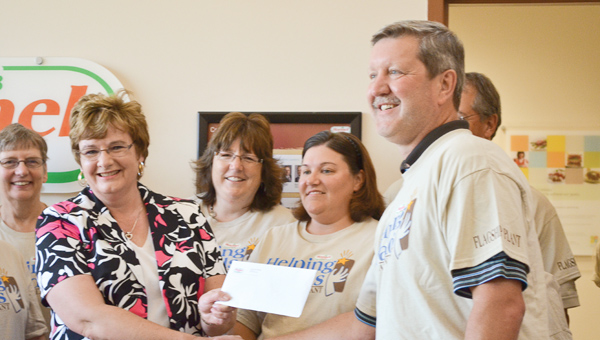 To some in Austin, the images and stories of the flooding near Duluth felt too much like déjà vu.

With the memory of past flooding in Austin, workers at the Hormel Foods Corp. plant and the plant’s Helping Hands committee decided to do their part, raising $1,800 for the Red Cross and flood relief.

“We were kind of taken back to 2004 when we had a pretty big flood here,” said Austin Plant Manager Tim Fritz.

Fritz said the employees raised money through things like a charity auction.

Freeborn-Mower Red Cross Executive Director Elaine Hansen accepted the check, and it will be designated to the Red Cross efforts for the June flooding in northern Minnesota.

Hansen said the Red Cross’s work wouldn’t be possible without donations and help from the community.

“It’s huge to know that people care,” she said.

$24,000 — money for financial assistance to clients