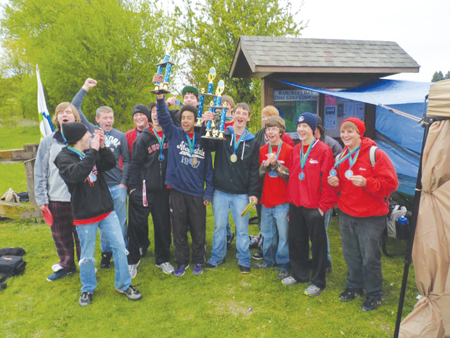 The Minnesota Frisbee Association on April 28 in conjunction with the Albert Lea Convention & Visitors Bureau held the state high school disc golf championship tournament at Bancroft Bay Park in Albert Lea. The tournament is called the MFA High School Championships. Teams comprised four or five players, and the three lowest scores in each team from each round were used in factoring team scores. Each school could send up to four teams.

With wet, windy and cold weather, turnout was lower than expected. Six teams competed, with 29 boys and no girls. Austin sent three teams. Kennedy from Bloomington sent two teams, and Owatonna sent one. Some others canceled due to the rough weather. Play was rough in the first round that morning, but drier and smoother in the second that afternoon.

In the end, Austin A, B and C walked away with the top three team trophies. Kennedy A received fourth, and Owatonna fifth. The trophies are destined for school trophy cases. Each player on a top five team also won medals to keep themselves. In addition, the players who had the 10 best individual scores won medals. Nine of the top 10 medal winners were Austin players.

Medals and trophies for girl teams and players went unclaimed.

— Submitted by the Minnesota Frisbee Association