It hasn’t really sunk in for Brittany Ehmke. The 22-year-old Austin resident and her family experienced a tragedy few can relate to and even fewer can understand. Brittany’s 13-year-old sister Rachel committed suicide Saturday. 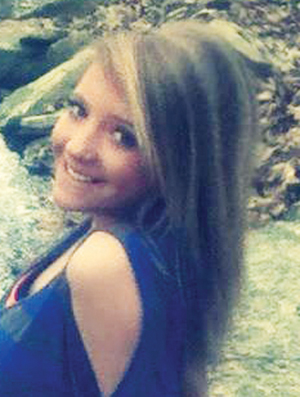 Brittany told her family’s story to a teary-eyed group at the Community Against Bullying meeting Tuesday night at Neveln Elementary School’s cafeteria. She told the group that Rachel had been bullied at Kasson/Mantorville Middle School for more than a year. She spoke about how other girls would tease, make fun of and be cruel to Rachel. And she described how her father found Rachel hanging from a beam inside Rachel’s mother’s home, barely alive. She did all that in an effort to raise awareness about bullying and to tell her sister’s story.

“It hurts so bad,” Brittany told CAB members and Austin residents. “I wish I would have known what my little sister was going through.”

Brittany wants people to know what happened to her sister, and she would rather people hear about it from her than the spreading rumors about Rachel. Brittany said Rachel dealt with bullying for quite some time. She said other students would put gum in her books and say mean things to her as she walked down the hall. She said Rachel’s dad, Rick, had spoken to K/M Middle School principal Al Hodge about Rachel’s situation when incidents came up.

Incidents like when someone wrote “slut” on Rachel’s locker last fall. School staff waited for some time to clean off her locker, according to Brittany.

“My dad had to call twice before [they] actually did something about it,” Brittany said. “Everyone had to watch my little sister open her locker [with the word still present].”

“We’ve got a lot of kids hurting,” Matuska said. “Our priority this week, number one, our priority is Rachel’s family.”

Another incident happened last Friday at school. Brittany said she was told some students encouraged others to call Rachel names.

Rachel made plans to hang out with her older brother, Jonathan, Saturday, but she had homework to do first, so he dropped her off at her mom’s house. Rachel’s mother was in Las Vegas at the time.

“She got out of the car and she turned around and smiled at him for the last time,” Brittany said while tearing up. “And then she went inside.”

Jonathan called her father, asking him to pick up Rachel. Her dad got to the house about 25 minutes after Jonathan dropped her off, according to Brittany. Brittany said he walked up to the door and saw Rachel hanging by a noose from a beam in the ceiling inside.

Rachel had locked all the doors, which forced Rick to break down the front door down using his shoulder and a baseball bat. After getting Rachel down, he called 911.

Rachel was still alive when paramedics took her to the hospital, and family members gathered there hoping she would be OK. Rachel’s mother was rushing back to Minnesota as well.

Around midnight or 1 a.m., doctors let the family know that Rachel had no chance of survival. She had sustained too much damage to her brain, heart and lungs. The family told doctors to keep Rachel on life support for as long as possible so her mother could see her.

Brittany and her family said their goodbyes and held Rachel’s hands.

Brittany’s mother got to the hospital that morning. The family spent as much time as possible with Rachel before the doctors told them the coroners needed to take her away.

Since the tragedy, Rachel’s family is hearing from friends, relatives and even strangers, some of whom are sharing signs Rachel supposedly may have left. But Brittany said she didn’t notice any signs; it wasn’t until the family searched through Rachel’s belongings that they discovered how unhappy she was.

Rachel had always told her family she was “fine” with the situation and not to worry about her. When Rachel’s father said he was going to take action and talk to the school, Rachel supposedly told him not to because he would make things worse. Yet Brittany said her family found a notecard that said “Fine = I wish you knew how I really felt.”

“I just wish she would have known this did not have to happen,” Brittany said.

Though the Ehmkes have a long journey ahead, friends and family are stepping up. A “Walk for Rachel” will take place at 3 p.m. Saturday, May 19 at Mill Pond. Organizers will sell $3 bracelets and $7 car window stickers that say “STOP BULLYING NOW. RACHEL EHMKE 1998-2012.” The group will also accept donations, and organizers are planning to put donation buckets in area businesses. A benefit account has been set up at Home Federal Bank branches throughout southern Minnesota as well. CAB and Desperate Tears, a local group raising awareness about suicide prevention, will hold a vigil prior to the walk.

Brittany isn’t done telling Rachel’s story. She said she plans to talk with Kasson/Mantorville staff to possibly organize an assembly, and she is willing to talk about Rachel and speak out against bullying.

Her family is speaking out, too. Several of Brittany’s family members were at the CAB meeting, offering their support and speaking out against a problem they know can’t immediately go away, but needs to change before more tragedies occur.

“There’s definitely people that it affects,” said Derek Ehmke, Rachel’s brother. “Words do hurt. I don’t think that anybody should feed into bullying because they want to be accepted by friends.”

The Ehmkes have heard that students who bullied Rachel have faced pressure of their own, as people are contacting them and their families to demean them. Brittany said that should stop, as it perpetuates everyone’s pain.

“We don’t want that,” Brittany said. “My sister wouldn’t want that. I know that she would not want this to keep going.”

At the end of the day, the Ehmkes just want people to quit bullying.

“We just want anybody who is bullying, just to stop,” Brittany said. “I don’t care if it’s in Kasson or it’s here. I don’t really care where it is, because this is the worst thing you can ever go through, that you can suffer through, because people were hurting, were so mean to her and she felt there was nothing else to do.”

After Brittany finished speaking and answering questions, she went to the Neveln cafeteria lunch bench where her family sat. They wrapped their arms around each other in a group hug, stifling their cries.